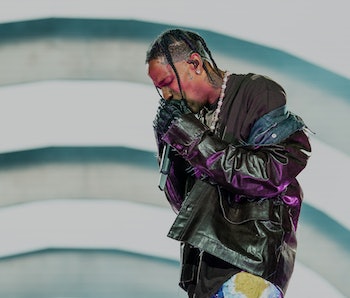 Travis Scott has requested to be dismissed from several Astroworld Festival lawsuits that have named him as a defendant. According to Rolling Stone, the rapper has denied all allegations against him, filing a legal response on December 6 in hopes to be dismissed from 11 lawsuits. Scott’s statement also noted he would likely file more dismissals in the future, a representative for Scott told RS.

The rapper’s rebuttal serves as his first response to the lawsuits, of which there are more than 275 to date. Most allege the defendants, including Scott and event organizers, were negligent and stood to make huge sums of money from the concert, which left 10 people dead and hundreds injured after a massive crowd surge. Still, Scott’s representative told RS that the rapper “is not legally liable” for the tragedy.

According to CNN, Scott did not know of the mass casualty declaration until the following morning. “That never got to Travis, that never got to Travis's crew,” attorney Ed McPherson told ABC's “Good Morning America.” “He's up there trying to perform. He does not have any ability to know what's going on down below.”

Who’s accountable? — Astroworld promoters Live Nation and its subsidiary ScoreMore followed Scott’s lead and denied all allegations against them, as did Harris County Sports and Convention Corporation, which owns venue NRG Park. Those defendants, however, did not ask for dismissal.

Mounting information, gathered by the Houston Police Department and the plaintiffs’ attorneys, will help decide who is most culpable for the tragedy at Astroworld. Attorney Ben Crump, who is representing several concertgoers — including the family of Ezra Blount, the 9-year-old who died at the concert — has scrutinized Live Nation in particular because of its position as the largest show promoter in the world.

“This lawsuit isn’t just about seeing justice for [the Astroworld victims],” Crump said at a press conference. “It’s about making sure that Live Nation and all of the organizers, promoters, and anybody else who had anything to do with the failure here know that you cannot allow this to ever happen in the future, even if you have to immediately stop the concert.”

With hundreds of suits continuing to be filed, attorneys have filed a joint motion to Texas’ Supreme court to consolidate the cases to one judge, helping to simplify the legal proceedings. Currently, attorneys are representing 2,500 plaintiffs or potential plaintiffs.

Chaos — Since Astroworld, attendees have detailed the chaos inside: mass injuries from surging crowds; inescapable mosh pits leaving fans gasping for breath; screams for help drowned out by blaring music; nonchalant (and not enough) security measures. Over 50,000 fans attended the music festival, which was advertised for all ages.

Between the event organizers, venue, security management, fans, and Scott himself, it’s hard to pinpoint who exactly is to blame for the tragedy. Many lawsuits have called the rapper careless, pointing to Astroworld’s lack of safety measures and Scott’s past encouragement of raging crowds. One legal filing even described the event as “preventable and predictable.”

Scott’s image — and revenue — has been severely impacted by the events at Astroworld, and many translated his initial response to the tragedy as a move to save face. Several victims’ families also rejected Scott’s offers to cover the cost of their loved ones’ funeral expenses, telling Rolling Stone they felt the offer was a public relations tactic. Instead, they said they would let the courts decide action.