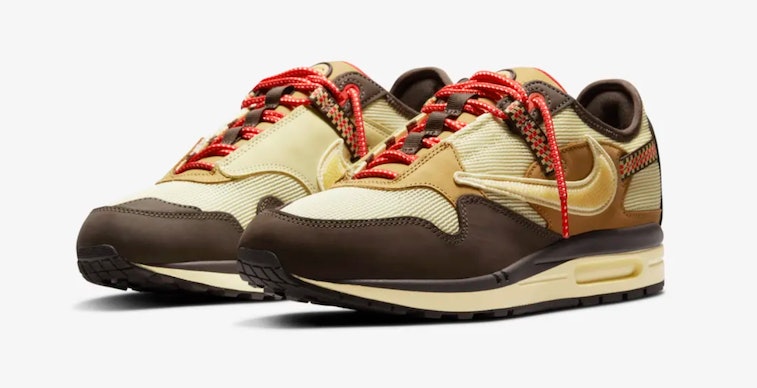 Hype for Travis Scott’s Air Max 1 sneakers has been building since March, when they were first teased on SNKRS. Since then, fans have been scouring the rapper’s Instagram posts, paparazzi shots, and leak accounts for closer looks at the rugged design — and finally, Nike has given us an official look. Two iterations of the Air Max 1 are set to drop in December via the SNKRS app.

Inspired by the desert and trending workwear designs, the shoes boast a boot-like look reminiscent of Nike’s own utilitarian ACG line. Camping-esque branding, reading “Cactus Jack” appears on a triangular flag at the heel, while Nike’s own Swoosh has been reversed and reworked in a thick, textured fabric akin to snakeskin. Built to be durable, Scott’s Air Max 1 isn’t meant to be hoarded by hypebeasts — but he can’t avoid the inevitable.

What’s dropping — Black, lavender, light gray, brown, and yellow versions of the sneaker are expected from the rapper, although only the latter two are currently listed on SNKRS. They’re also the only two models we’ve seen on Travis’ feet, suggesting the other three colors aren’t up to his standards just yet.

With dark brown, caramel, and yellow shades, the “Baroque Brown” Air Max 1 is one of the few non-monochromatic sneakers in the capsule. Yet the tonal “Saturn Gold” AM1 may be the most coveted shoe by fans considering its reference to a previous Scott x Nike collaboration: In 2019, the rapper created a yellow variation of the Air Jordan 6, never released despite hypebeasts’ pleas. Here, the golden Air Max 1 is a second chance for fans to get their fix.

How to cop — Both the “Baroque Brown” and “Saturn Gold” AM1s will drop on SNKRS in adult, little kid, and toddler sizes. On December 16, users will have to enter a draw to purchase the $160 sneakers, with their winning odds increased the more they interact with the SNKRS app ahead of time.

That said, fans attending Scott’s Astroworld may have a better chance at copping the Air Max 1s, which are rumored to release via a SNKRS Pass at the rapper’s Houston store Space Village. “A wild week is upon us,” Scott teased on Instagram. “Join us throughout the week for a bunch of [fire] reveals and product.”