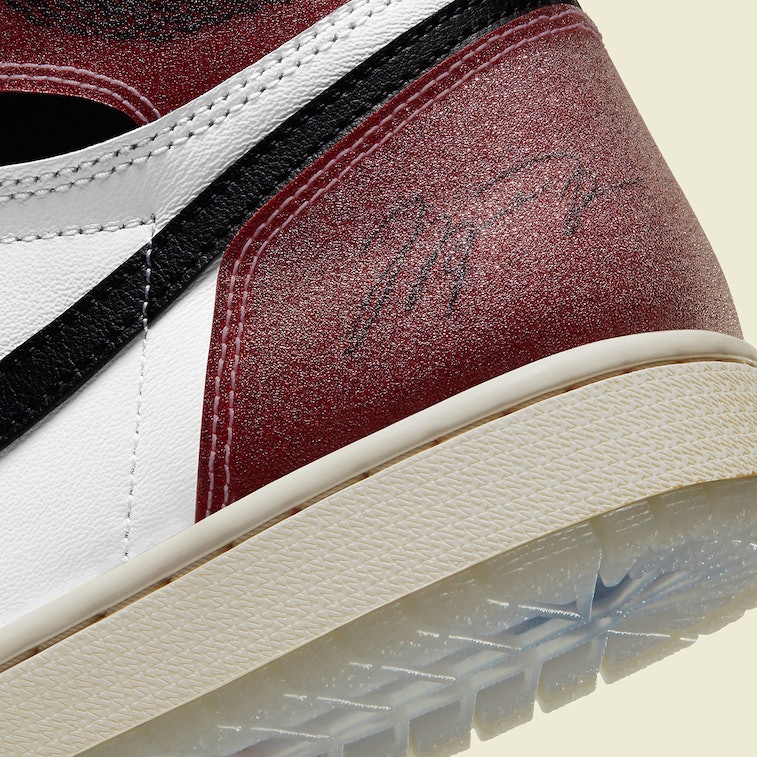 The Trophy Room, a Florida sneaker boutique owned by Michael Jordan's son Marcus, has the access to the Air Jordan assets you'd expect. But why get mad about nepotism when the result is sneakers such as these, the glittery Air Jordan 1 slated to release in February.

The retro sneaker is a remix of the heralded "Chicago" color scheme, giving the red panels a shimmering finish. His Airness' signature is printed on the heel, and the new translucent outsole has more than meets the eye when flipped over.

Blue and red stars visible underneath are presumably inspired by the 1985 NBA All-Star weekend, where Jordan wore the "Chicago" 1s and came in second to Dominique Wilkins in his first Dunk Contest. The connection is made even more clear by a special Air Jordan graphic on the insole based on the '85 ASG logo.

Eight shoes in five years — The Trophy Room only opened in 2016, but family ties help make the Air Jordan 1 its eighth release with the brand. This is the boutique's first take on the seminal Jordan sneaker, however, with previous releases consisting of the Air Jordan 5, 16, 17, and 23.

Of the past sneakers, the two Air Jordan 5s have been by far the most covetable. Part of this can be attributed to the lesser acclaim held by the other models, but the "Icy Blue" and "University Red" makeups aren't without their own appeal. Those two pairs of kicks have recently sold for around $1,100 and $4,500, respectively, and we can expect hefty price tags on the resale market for the Air Jordan 1 as well.

The 1s should arrive on All-Star Weekend — The status for this year's NBA All-Star Game is still up in the air because of COVID, but you better believe the promotional efforts will still go ahead as planned. Even if the NBA is forced to hold a weird video game substitution like the NFL, there's still money to be made in the yearly drop of themed products.

No one will be less stoked on the Trophy Room Air Jordan 1s if a traditional All-Star Game isn't held, and a somewhat limited run rumored to consist of 12,000 pairs, according to Sneaker News, will also help drive the hype.