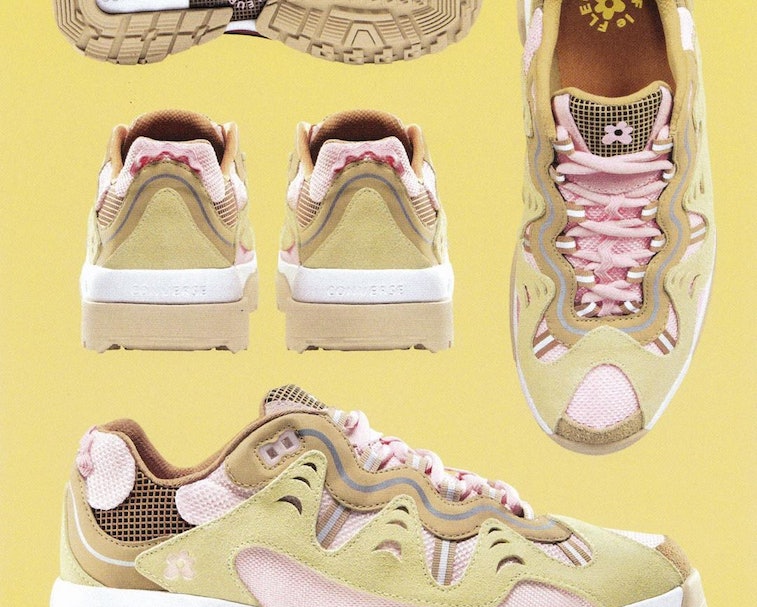 Last fall, Tyler, the Creator and Converse debuted the Golf le Fleur* Gianno. Unlike the artist's previous collaborations with Vans and Converse, it was a completely new silhouette, featuring a chunky construction reminiscent of hiking sneakers. Now, it's back in two new colors as part of Golf le Fleur*'s SS20 collection.

The Gianno is set to release this Thursday, April 16, in "Parfait Pink" and "Skylight" variants, both of which are well suited for spring. The former mixes a soft pink with several shades of brown, while the latter combines the blues with yellow and a dark brown outsole. They're practically begging to be worn frolicking through a meadow, which may have to remain a fantasy while social distancing is in effect. But hey, maybe a splash of color will spark joy while you're stuck in your domicile.

No need for bots this time — Fanfare wasn't exactly crazy the first time around, meaning they can still be had for a reasonable price. And that's a good thing — don't let yourself be swayed only by the kicks snatched up by mogul wannabes who conjure up rare pairs and demand your rent money. You can't exactly call anything with Tyler, the Creator's name a "sleeper," but the Gianno is nonetheless a more than solid shoe to be had without fuss.

The DNA — In addition to hiking shoes, the Gianno also pulls inspiration from '90s basketball shoes. The upper is constructed of leather, nylon, and suede with great details that include a debased Golf le Fleur logo and reflective eyelets that extend across the shoe. As Converse senior design director Amy Rauner said last year, "The multidirectional non-skid, lugged outsole should work in many different conditions — whether it be biking on BMX trails or hiking in the woods."

Given Tyler's propensity for the outdoors, he'd want you to wear these while being active. When the time's right, don't fear a little damage.

Release details — According to Golf Wang's Instagram post, the Giannos will release this Thursday. End Clothing, however, has them pegged for 3 p.m. the following day. We'll update once we find out if there's been a mixup or if End Clothing is simply an outlier. Either way, the Gianno will also be available at other select Converse stockists for $129. It'll likely be available through Golf Wang's website as well — but like we said, purchasing these shouldn't prove frantic.