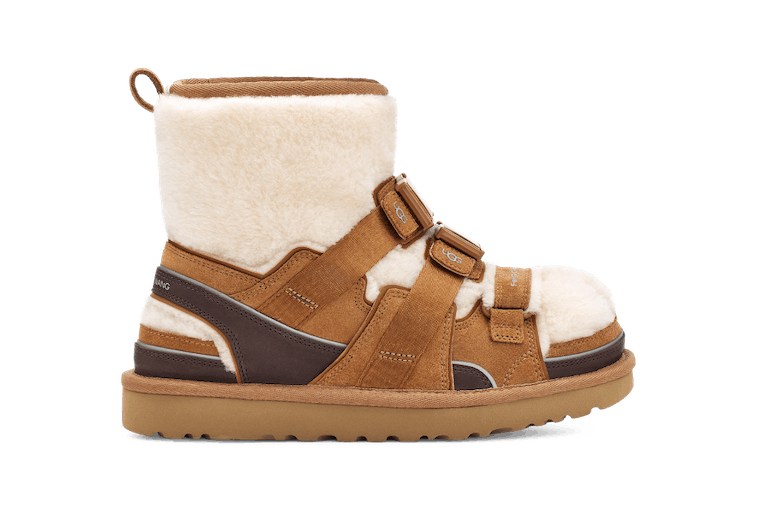 In case you missed it, Uggs are back, and better than ever. But as summer approaches, just the thought of wearing a shearling bootie makes our feet sweat — which is why the brand has created a boot that can also be turned into a sandal. Get you a shoe that can do both!

Already touting impressive designer collaborations with brands like Telfar, Ugg has gone from Valley Girl staple to luxury fashion brand. Furthering this reputation, the brand has partnered with Chinese designer Feng Chen Wang for its newest release. With a campaign dubbed “Warmth vs. Cold,” the two juxtapose hot summer weather with the more Ugg-boot appropriate winter, highlighting the versatility of their collaborative shoe.

Ugg-cellent — Under the influence of Feng Chen Wang, the Ugg boot is nearly unrecognizable. Flipped inside out, the shoe boasts sheepskin on its exterior, acting more as a boot liner than an actual boot. It’s held in place by a tanned buckle-adjusted sandal, which can be worn with the boot liner or by itself depending on the temperature — or style — you want to wear. Arriving in Ugg’s signature chestnut shade, the boot-sandal is accented with Ugg and Feng Chen Wang co-branding.

If you’re still working from home, or just need a good house shoe, the boot liner also functions solo. As a result, consumers get three shoes in one, and an Ugg silhouette they can wear year-round. But designing the versatile Ugg boot was no small feat, as noted by Wang in a press release.

“Initially, it was a challenge to design a pair of boots for the summertime all the while keeping their classic design,” Wang explained. “In order to do so, I chose to turn boots into a pair of three-in-one sandals which break the seasonal barrier.” Wang is best known for her practical designs, which focus on unisex garments with technical finishes. Subsequently, this Ugg boot-sandal is unisex, and uses reflective piping and adjustable nylon straps to accommodate any shape of foot. The genderless silhouette can really be worn by anyone, anywhere.

A costly collaboration — That is, if you’re willing to pay the price. While three shoes in one sounds like a bargain, the cost of this collaboration seems to imply you’re paying for each silhouette separately. At $325, you’re paying roughly $108 for each style — but if you’re planning on wearing the shoe year-round, it might be worth it. Find the Feng Chen Wang x Ugg boot-sandal on Ugg’s website, or on your feet soon.