Under Armour's fastest and lightest running shoe ever is here 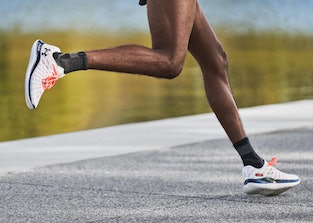 How many miles of testing the Flow Velociti Wind shoe has been through.

Under Armour has unveiled its fastest and most lightweight running sneaker to date, the "Flow Velociti Wind." With a new cushioning system called Flow, which is also on the Curry Flow 8, Under Armour has done away with a traditional outsole and put a sticky tread directly on the foam outsole. Doing so eliminates an extra two or three ounces typical for outsoles, bringing the Flow Velociti Wind to just 8.5 ounces in a standard men's size 9.

"Flow is smooth in every sense of the word," Tom Luedecke, Under Armour creative director of footwear innovation, said in a release. "It's a smooth experience while running in the shoes. It's a smooth feeling when going through the entire gate [sic] cycle and foot strike. And it also feels smooth in the sense that it's lacking distraction. There's nothing there that is getting in the way of you and your flow state." We suspect he means "gait cycle," but we'll go with the flow regardless.

In order to create this "flow state," Under Armour put the Flow Velociti Wind through more than three years of testing. The timeline for the new shoe included 17 rounds of raw material testing, nine rounds of biomechanical testing, and more than 11,000 miles of wear from the brand's elite runners.

More on the tech — The Flow Velociti Wind is designed to hold up at high speeds over long distances. Developed in partnership with Dow Chemical, the Flow system consists of a singular piece of foam touted as responsive, supportive, and grippy. Even without a traditional midsole, Under Armour promises better grip through the naturally sticky surface of its Flow foam.

Above the minimalist is cushioning is a Warp upper, which has been designed to mold to a wearer's foot. Supporting tapes have been placed based on findings from biomechanists and act as "seatbelts" for the foot to provided tension when needed and relax when not. This should eliminate any feeling of buckling or pinching that comes in uppers built from one continuous material.

For those interested in the more granular numbers of running shoes, the Flow Velociti Wind sits at 26mm on the heel and drops to 18mm at the forefoot for an 8mm of offset.

Try 'em out in March — Priced at $160, the Flow Velociti Wind is set for a March 3 global launch through Under Armour's website and physical stores, as well as select stockists.

While Nike and Adidas still hold most of our attention for running shoes, it'll be interesting to see if Under Armour can win over runners with its uniquely sparse cushioning system.