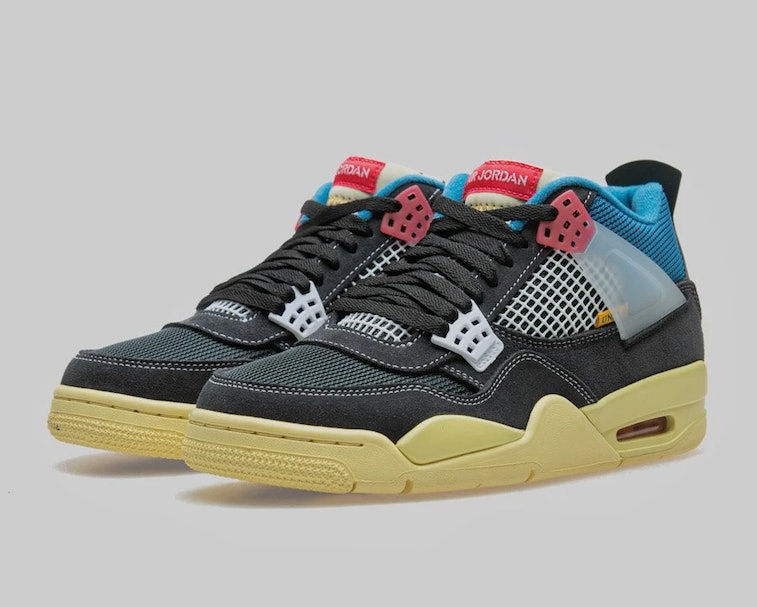 If you're a sneakerhead who's hoping to get another shot at the latest collab from Union and Jordan Brand soon, well, you're going to have to wait a little longer. The collection, which includes a couple of limited-edition Air Jordan 4 sneakers as well as apparel, originally launched on Union LA's site last month and was scheduled to release on the SNKRS app September 30. Unfortunately for those who missed out on the first drop, though, it looks like Nike has now quietly pushed back the arrival of the capsule until October 16. The good news, if anything, is that at least the delay is only a couple weeks long and not months.

No Guava for you — It's worth noting that, as some of you may know, Nike won't be selling the "Guava" color of the Union x Air Jordan 4 on its app, which was exclusive to the LA-based brand's online shop and retail drop from August. That means you'll only have the chance to get the "Off-Noir" AJ4 pictured above, along with two other silhouettes from this collab, the Jordan Delta Mid Union and Jordan Zoom 92 Union. Nike will also have the entire clothing line available on October 16, which features items like a jacket, pants, shorts, t-shirts, and, of course, hoodies.

You'll need all the luck you can get — Right now, there's no word on why Nike and Jordan Brand decided to delay the release. Input has reached out to the brands and we'll update this article with any information we may get. For now, anyhow, just be ready come October 16 at 10 a.m. ET, because you'll be competing with a bunch of other streetwear aficionados (and resellers) who want these sneakers and clothes just as much as you — if not more.

Just to give you an idea of how hyped the Union's Jordan 4s are, the Guava color that was priced $250 at retail is now reselling for as much as $1,200, depending on the size. Meanwhile, the Off-Noirs (which were part of the first drop on Union's site) are also being sold for a premium of hundreds of dollars above their MSRP. That shouldn't come as a surprise considering how tedious it is to buy sneakers nowadays, but should serve as a warning for the competition you'll be facing to get a pair of them next month.

Update: Jordan Brand told Input that the Union collaboration is still arriving September 30 globally, while the North America drop will have to wait until October 16.