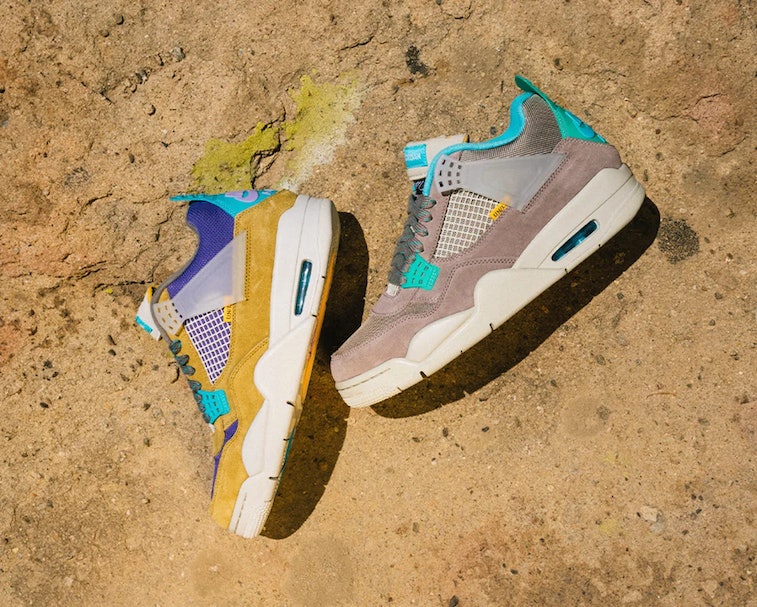 Union’s annual Jordan collaborations are some of the most coveted sneakers out there, and this year’s 30th-anniversary designs are no exception. The boutique-turned-brand revealed two new Air Jordan 4 sneakers, inspired by outdoor gear, just earlier this month — and now, Union has announced it’ll launch the shoes via raffle, “to keep this year’s release as fair and democratic as possible.”

In today’s climate, there’s just too many bots, resellers, and hypebeasts trying to score sneakers for reasons other than wearing them: It’s no longer about who loves shoes, but rather who can actually afford them. Now, SNKRS, Adidas, and Union are turning to lottery-based draws to offer some sort of protection for sneakerheads.

Made to look vintage — The “Tent and Trail” capsule consists of two different color schemes that serve as an homage to the late ‘80s and early ‘90s. On its website, Union explains that it designed the Air Jordan 4s as if we were still in that era, citing the popularity and bright hues of outdoor gear like puffer coats, hiking boots, and camping backpacks.

Accordingly, both Union pairs boast a rich aqua blue. A “Desert Moss” iteration contrasts the bright blue accents with a muted yellow upper, while a deep purple hits the quarter, collar, and toe box. The second variant, dubbed “Taupe Haze” and exclusive to Union, comes dressed almost entirely in a grey-brown shade, featuring hits of yellow and of course, aqua, to break it up.

Using the same redesigned AJ4 from last year, Union’s sneakers sport translucent paneling and a mix of suede and mesh materials for the upper. The most noticeable — and controversial — change to the shoe comes on its tongue, which is stitched in half to fall shorter as owner Chris Gibbs has always worn his Air Jordan 4s. If you’re not a fan of the cropped look, though, you can easily remove the stitching to unfurl the tongue to its full size as originally released in 1989.

Take a hike to Union — Much like the A Ma Maniére Air Jordan 3 that dropped earlier this year, Union will host both an in-person raffle and an online raffle for its Air Jordan 4 designs. A global draw will take place on June 20, when consumers can visit Union’s drop page — between 9 a.m. and 11 a.m. PT — to enter the online raffle.

On June 20 and 21, sneakerheads who live within L.A. County can line up outside of Union’s Los Angeles store from 9 a.m. to 3 p.m. for a chance to enter the in-person raffle. A valid California ID must be shown to verify qualification, and only one entry is allowed per person — multiple entries will disqualify all entries.

Union’s “Desert Moss” AJ4 will release through both the boutique and the SNKRS app — where it’ll undoubtedly also be subjected to a draw — while the “Taupe Haze” will be exclusive to Union. The boutique has yet to announce when the SNKRS drop will be, or when winners of the raffle will be chosen, but we’re sure to hear more as we approach the end of the month.