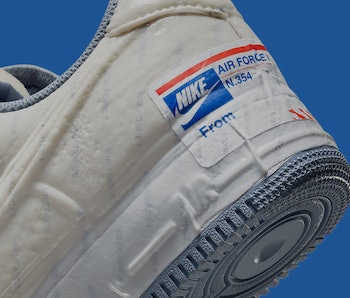 Still yet to be released, the sneaker set off a short dispute over intellectual property rights that saw the government agency call out Nike for its hypocrisy. Just a week prior to the USPS’s public statement, Nike had initiated legal action against MSCHF for its custom Air Max 97 “Satan Shoes” made in collaboration with Lil Nas X. The Postal Service pointed out that while Nike is quite hawkish in protecting its own copyrights, it was using USPS’ own iconography without express permission.

“The Postal Service, which receives no tax dollars for operating expenses and relies on the sale of postage, products, and services to fund its operations, protects its intellectual property,” the USPS said in its initial statement, which has now been deleted from its website. “Officially licensed products sold in the marketplace expand the affinity for the Postal Service brand and provide incremental revenue through royalties that directly support it. Sales of unauthorized and unlicensed products deny support to the hardworking women and men of the Postal Service.”

A leak is what set this whole thing off — Prior to the USPS crying foul, Nike had never shown its Air Force 1 to the public or announced any release details. Instead, leaked images of the planned shoe circulated through the internet enough to get the attention of the Postal Service.

In those images, the Air Force 1 clearly riffed on the USPS’ shipping labels with a similar sticker appearing on the sneaker’s heel. A repeating print across the upper also invoked the Postal Service’s Priority Mail packaging, while the overall color scheme referenced its insignia and uniforms.

Now that the USPS has come to an agreement to license the Air Force 1, it’s possible the design will change to make the references even more overt. Then again, Nike may have already produced the sneaker, meaning it just needed the USPS to sign off on it before releasing to avoid any legal issues. Whatever financial arrangement is part of the deal, we may never know because it was settled out of court.

Those eagerly awaiting the sneaker will be relieved to see it still release, but if the dispute had got more contentious the Air Force 1 could have joined other fabled shoes canceled because of trademark issues.