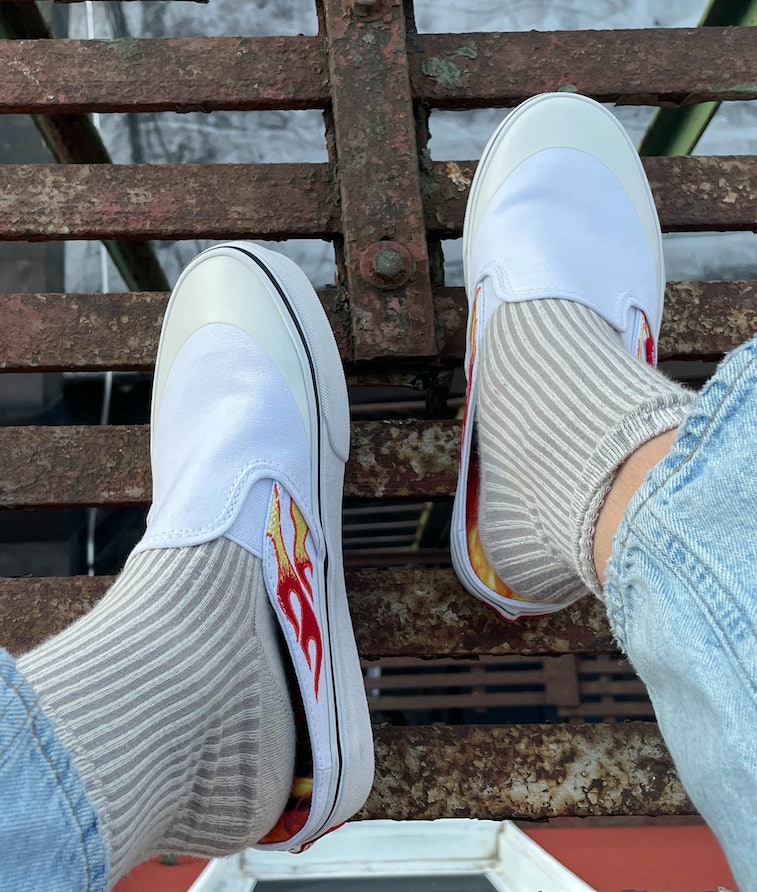 Last summer, A$AP Rocky teased his then-unreleased Vans collaboration in the most A$AP Rocky way possible, accessorizing the sneakers with a trucker hat, jorts, and a joint.

Paparazzi photos of the rapper fueled not only fan pages but a full-on mulement — dedication to shoes with a closed toe and exposed ankle — which the ‘rona times had encouraged, but Rocky now served as a spokesperson for. If mules like Birkenstocks and Crocs were meant for working from home, A$AP’s Vans were meant for leisurely strolls, errand-running, and looking cool on city stoops, settings he all entertained while wearing his flame-embroidered mules.

With the ability to slip on and off, the backless footwear is meant for chilling — although that’s easier said than done when you’re a regular person rather than a rapper smoking a joint alongside your morning coffee. Yet Rocky’s Vans are exclusively available at the mall store PacSun, where he’s currently serving as guest artistic director, and more importantly, where everyday people shop. Can the slip-on sneakers possibly bring A$AP’s laidback attitude to the masses?

Women, always ahead of the game, have long embraced the leisure of slip-on shoes, while men are just now discovering the comfort and clout that accompanies the backless silhouette. Rocky’s Vans collaboration appeals to both crowds, leaning not too far in either direction, with a retro design able to be styled however, by whoever.

At first look, the mules already offer a very desired element of the rapper’s lifestyle: his impeccable fashion sense. Although the shoes haven’t been completely “reinvented,” as A$AP previously claimed, they do fit in with his refined style, adding an elevated touch to Vans’ classic model. The brand’s sneakers have always been cool — beloved by skaters, Californians, and musicians like Rocky himself — but the rapper’s simple addition of an embroidered flame and a rubber toe cap brings Vans’ mule to the next level.

Prior to A$AP’s heel-baring model, the Birkenstock Boston Clog reigned supreme in my mule rotation. There’s little that beats the suede shoe’s molded footbed and minimal design — Birkenstock has made a name for itself in the mule space for such features — but it’s arguably less “streetstyle” than Rocky’s flaming alternative, which lends an olive branch between slipper and sneaker enthusiasts.

Like the former, the Vans mule allows for easy on-and-off wear, padding its flame-emblazoned ever so slightly for extra comfort. Stretchy fabric at each side of the tongue offers a secure yet flexible fit — meaning the shoe won’t awkwardly slap around like a sandal — and A$AP’s added mudguards create a bit more buffer between the sneaker and anything it touches. The model may not have a closed back, but it still boasts the same durability (if not more) as any of Vans’ other skate shoes. The brand’s signature rubber waffle outsole ensures its mule is capable of being much more than a house shoe, as does Rocky’s fire design.

PacSun’s young demographic may not align exactly with the rapper’s following, but it could easily work the backless Vans into their wardrobes of high-waisted jeans and cropped cardigans. Yet I’d like to argue that A$AP’s mules are really meant for sneakerheads who don’t take themselves too seriously, especially in a market where sneakers have become impossible to acquire. It’s much easier to slip into something comfortable than to fight bots during releases and pay absurd resale prices. Why not indulge, especially in something so accessible?

Pairs of A$AP’s Vans mules, including other variations, are still available on PacSun’s website in every size. And unlike most celebrity collaborations, the shoes are reasonably priced at $75 a pop, meaning you could stock up on the minimalistic sneakers if you wanted to. The rapper’s sneakers are a pick-up as easy on the wallet as they are on the eyes — which should make wearing them just as simple as a decision.