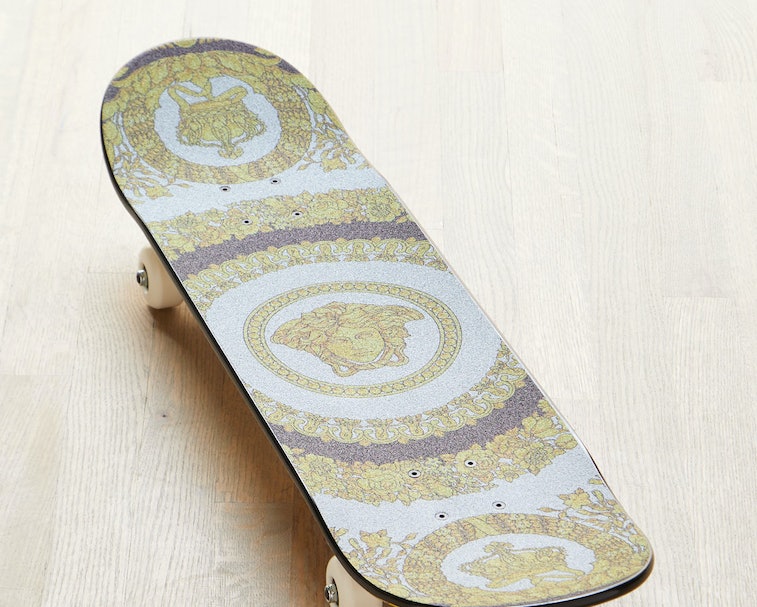 Just when you thought Gucci's $8,300 guitar case couldn't be topped by another piece of absurd gear, well, here comes another high fashion brand ready to blow our minds (and wallets). This time around it's Versace, which has dropped a $795 skateboard that dons its iconic Medusa logo and signature white-and-gold, baroque patterns. The board, which is made in Italy of course, also features crowns, flowers, wreaths, and beads graphics to give it that royal feel you so desperately need while you're out there hitting ollies, kickflips, shuvits, and any other moves you might be good at. It's incredibly extra, and that's what makes it so desirable.

To collect or to skate? — With all that said, if anyone's spending close to $800 on Versace's board, chances are they're going to use it as a display piece and won't be doing any actual skating with it — which would truly be a shame when you think about it. Aside from the golden, Greek mythology-themed heritage elements from Versace, the brand says its skateboard is "crafted from high-quality wood," one that's complemented by pearl white wheels and black-and-gold tone trucks.

If you do plan to skate Versace's printed board though, the only piece of advice would be to keep it close to you, because this thing is basically screaming to get stolen. That could change if you put some nice wear and tear on it, but we can't make any promises.

A high fashion crossover — Skateboarding crossing over into the world of luxury fashion is nothing new. Just last week, Louis Vuitton signed its first-ever professional skater, Lucien Clarke, who worked with the house's menswear artistic director Virgil Abloh on a signature, chunky sneaker to celebrate his deal. Abloh, who's heavily influenced by streetwear, loves to incorporate aspects of skating into his designs, and he has made it one of his missions to bring that flavor over to Louis Vuitton.

As for the Medusa logo board, you can buy it right now from retailers such as Ssense and Neiman Marcus, as well as Versace's own site. And, in case you want to double down on the ridiculousness of it all, Versace also has a $225 soccer ball or an $1,100 travel mug that are pretty, pretty good — in case you're looking to spend some cash for the sake of it. Call it retail therapy if it helps during these trying times.