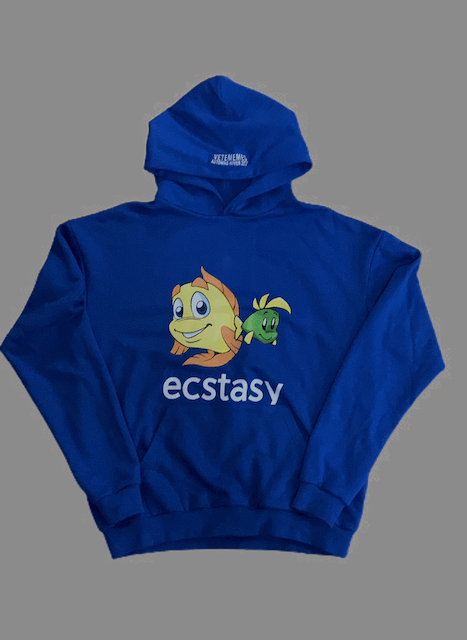 After two and a half years of dormancy, the parody brand Vetememes is returning this fall with a small collection. Vetements, which translates to "clothing" in French, is itself something of a parody of fashion, which made it a meta target for Vetememes when it first launched in 2016.

Vetememes' new collection, which is available for pre-order now, takes a looser approach to parodying Vetements products than it did in the past. And just like before, participating in the joke comes much cheaper than actually purchasing anything from the luxury brand. Prices for the new goods start at $38 for socks and top out at $170 for a hoodie. With the quality being comparable, these price points also serve as a commentary on the arbitrary markup for "luxury."

The new riffes — Vetememes' largely relied on swapping out its name while recreating Vetements pieces, but this collection features more original graphics. The Ecstasy hoodie, which bares the Internet Explorer logo under Vetements' direction, now features a pair of fish that look straight out of The Little Mermaid. (It also helps my case for arguing that all fish look zooted.) Vetements' obnoxiously cute Love Is... T-shirt, a collaboration with a New Zealand cartoonist, has been reimagined as a white and red ringer tee that completes the sentence with "Listen to Playboy Carti together."

The parody brand's take on Vetements' once-popular metal logo also returns on socks that say "My feet hurt," an embroidered dad cap, and a T-shirt and hoodie with an abstract graphic of two people screaming and running away from an alien.

Goofiest of all is the silk-screened Banana Bandana, which features a minion with a human eye wearing the infamous platform Crocs from Balenciaga, where Vetements co-founder Demna Gvasalia is creative director. It is perhaps the ugliest silk scarf I've ever seen, meaning it's just begging to be worn.

Is this copy cool? — There's a fine line between copying and inspiration in fashion, just ask Virgil Abloh, and Vetements itself likes to operate in that territory. The brand has made its name by making tongue-in-cheek (and more often than not, oversized) spins on existing fashion motifs, which is what makes Vetememes a worthy parody. What Vetements does on the runway is called a meme when it happens online.

Vetememes became quite ubiquitous seemingly out of nowhere when it launched with a simple black raincoat. When Gvasalia became creative director of Balenciaga, Vetememes was ready to follow with another parody label called "Boolenciaga." Both brands, which come from Davil Tran, released products until the spring of 2018, when they went into hibernation and the Vetememes Instagram account became what else but a source of fashion memes.

Now that Vetememes is back, the joke is no longer new but it does return with more sophisticated designs. If you're still laughing, you can pre-order from Vetememes' site now and expect delivery to begin midway through November.