Virgil Abloh's buzzwords about fashion are being turned into a book 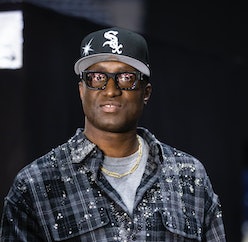 When Virgil Abloh speaks, he throws out a lot of metaphors and million-dollar words that are bound to go over well in a creative meeting. It's often hard to understand what he's even talking about, which is really just a nicer way of saying Abloh seems like he's full of crap. Some may mistake his superfluous language for wisdom — and that's the target audience for a new book full of "Abloh-isms."

Neither are on the same level as the artists whose books proceed them, but it's Abloh who's most fit to pick on because of the numerous allegations of plagiarism laid against him — and the very vague words that'll be printed inside Abloh-isms.

Perhaps the book has sorted through the nonsense — If a broken clock is right twice a day, Abloh is bound to have the occasional quote that rises above platitude. Four excerpts have been released from the upcoming book, and only one of them, the first, is plagued by the breathlessness often uttered by Abloh:

Sorting through Abloh's words to find what can be perceived as enlightenment must be a difficult task, and it's been undertaken by the editor Larry Warsh. Having read too many interviews with Abloh, I'm curious to see if any of his past drivel will, unfortunately, make the cut. What follows is my own excerpt of quotes that have sent my eyes rolling into a pile of pillows where I rest when exhausted by Abloh's plaudits:

At least it's cheap — Abloh-isms is far from the first book by or about Virgil, but one thing you can't call it is inaccessible. It'll go on sale March 16 for just $15 — you can pre-order it here — which is significantly cheaper than his Nike book ($70) or Figures of Speech ($96).

Those, however, are at least high-quality art books. Whether or not Abloh's words are worth spending $15 on, however, is a dubious proposition.