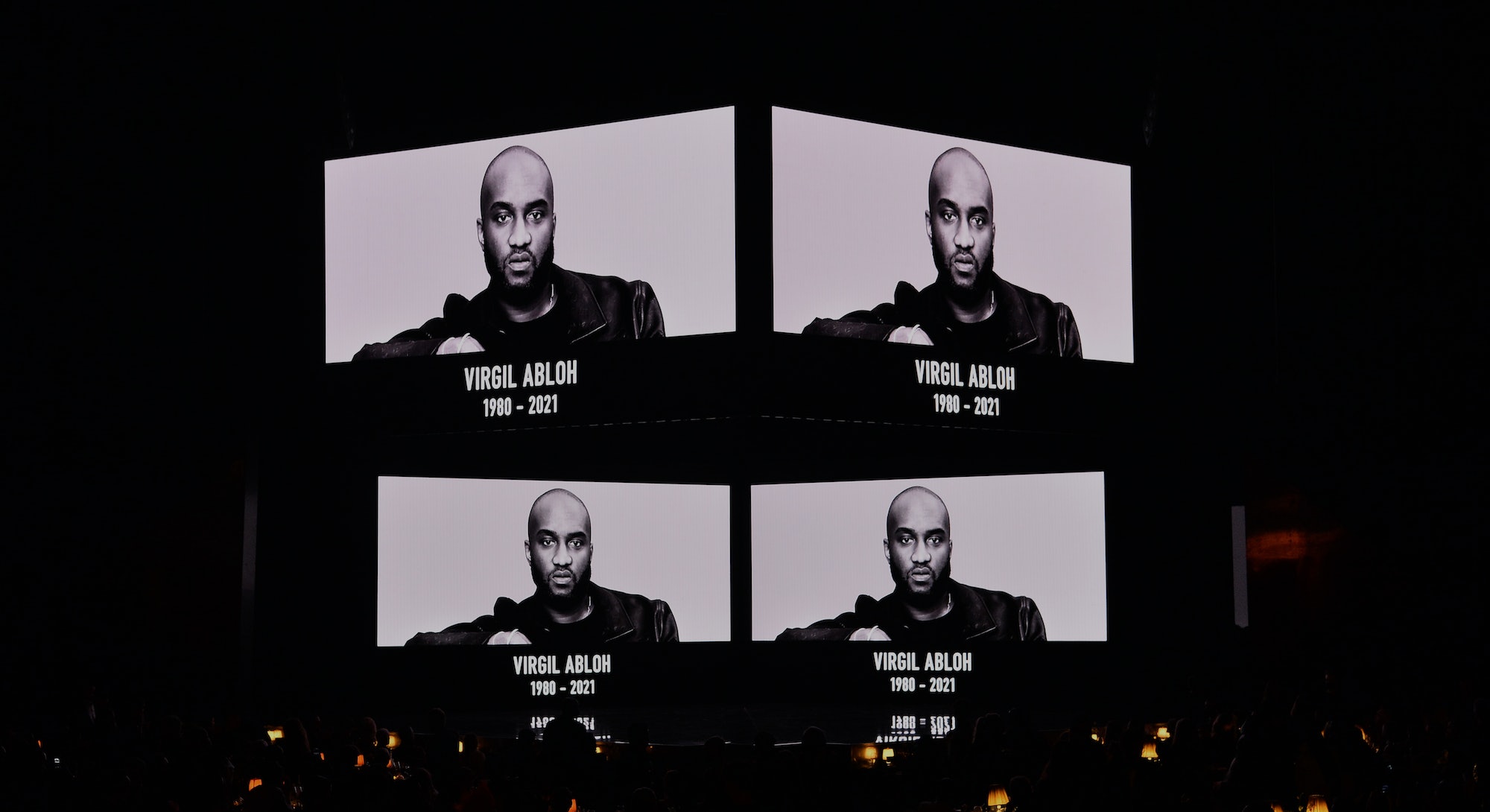 Tributes to Virgil Abloh have described him as a “genius,” “visionary,” and even “the meaning of fashion itself.”

You simply can’t describe the designer without using one of the overarching terms — his various roles, brands, collaborations, and influences make a short bio an impossible feat. As the founder of Off-White, artistic director of Louis Vuitton’s menswear, and longtime creative director for rapper Kanye West, Abloh was a leader — if not pioneer — in contemporary visual culture, luxury branding, and streetwear. Where he went, lines formed, and what he touched, often sold out. Aided by his Sharpie, he created an entirely new genre of style, fusing hypebeasts and high-end enthusiasts with his signature quotation marks.

Abloh’s death on Sunday, November 28 added a new kind of punctuation to his work, but by no means was it an ending to his influence. “Everything I do is for the 17-year-old version of myself,” Abloh’s wife quoted him as saying in an Instagram post. He believed deeply, she wrote, “in the power of art to inspire future generations.”

He made everything, even the impossible, seem possible for everyone.

Yet any material remnant of Abloh — whether that be an Off-White belt or collaborative Nike sneaker — isn’t what will embolden the next generation. It was the designer himself who proved you could teach yourself to design ready-to-wear collections; that youth culture could redefine luxury; that you could be the first Black creative leader at a major company. Throughout his career, Abloh broke barriers not just for himself, but for others — and he made everything, even the impossible, seem possible for everyone.

Born in Rockford, Illinois to parents who immigrated from Ghana, Abloh originally studied civil engineering and architecture before building his fashion empire. In 2009, he landed a six-month internship at Fendi where Kanye West, who had taken a step back from his rap career at the time, was also interning. The two quickly struck up a close friendship and creative bond.

From there, Abloh worked as the creative director of Donda — West’s creative lab — and provided art direction for Ye’s album with Jay Z, Watch The Throne, for which Abloh was nominated for a Grammy. Years of collaboration and camaraderie followed, once captured in an infamous photo outside the Comme des Garçons show they weasled their way into during Paris Fashion Week in 2009. The viral image, which was ridiculed by South Park for its depiction of then-unorthodox streetstyle, seemed to foreshadow Abloh’s success: Built from innovation, with an appeal to people, not corporations.

Off-White quickly became one of the industry’s most hyped labels, fusing streetwear with high fashion.

After launching his first fashion label, Pyrex Original, in 2012, Abloh saw success with his commercial brand Off-White — a line defined by its quotation marks, bold cross logo, and sly allegiance to what Abloh called “the three percent rule”: the idea that you can take an existing design and change it just a bit, and it will qualify as new.

With its unorthodox ethos, Off-White quickly became one of the industry’s most hyped labels, fusing streetwear with high fashion. Abloh regularly referred back to his degree in civil engineering, taking inspiration from architecture and structural design to reimagine the mundane. He reworked everything from Evian bottles to IKEA’s unmistakable big blue bag.

Abloh’s creations found their places in pop culture, too. The designer crafted Hailey Bieber’s wedding dress, Timothée Chalamet’s red carpet “harness,” and many notable on-court outfits for Serena Williams. His runways were regularly frequented by supermodels like Bella and Gigi Hadid, Kendall Jenner, Karlie Kloss, and Naomi Campbell; most of whom also wore Abloh’s designs outside of their shows.

And as Kanye signed a multi-year contract with Adidas, Abloh began working with Nike on “The Ten,” a collaborative exploration of 10 Nike sneakers that would put the Swoosh back on top of its competitors — including Ye’s Adidas Yeezy line. Each Off-White and Nike collaboration that followed only grew more desirable and more exclusive.

In 2018, Abloh truly achieved the same level of fame as the people he was dressing, taking on a role as the artistic director of Louis Vuitton’s menswear. His inaugural show marked a sense of completion — despite Virgil’s penchant for “unfinished” looks — as the designer walked down the rainbow runway to tearfully embrace his former boss, West.

That same year, Time Magazine named Abloh as one its 100 most influential people alive, with Japanese artist Takashi Murakami writing of him: “Every­thing from the way he works to how he uses his time to how he makes his judgments is principled. The foundation of his value, or branding, is humanity itself, not a superficial trick.”

What got Abloh to Louis Vuitton is the same thing he will be remembered for. A hard worker who maintained a grueling schedule — including, reportedly, 90 hour work weeks — the designer was passionate about what he made, and seemed to take pleasure in working on as many projects as once. Outside of zip ties and sneakers, he moonlighted as a DJ and furniture designer, truly living life to the fullest. And even as Abloh was hospitalized with cardiac angiosarcoma — a rare, aggressive form of cancer he battled privately since 2019 — he had plans to travel to Miami for a Louis Vuitton men’s wear show.

Abloh wasn’t a workaholic; rather, he worked with devotion, as if he was constantly trying to keep up with his own ideas. Though his work was met with a mixed critical reception and raised eyebrows among the designer community — some of whom considered it more “copying” than “creative” — his influence was undeniable.

Virgil created a world that empowers the modifiers, the remixers, the curators, and anyone else once on the outside looking in on the fashion industry. “There are people around this room who look like me,” he told The New York Times after his first Louis Vuitton show. “You never saw that before in fashion. The people have changed, and so fashion had to.”

People, and fashion, will continue to change as the world moves forward — but Abloh will be remembered as the one who created that world, and encouraged others to join. In his own words, “you can do it too.”