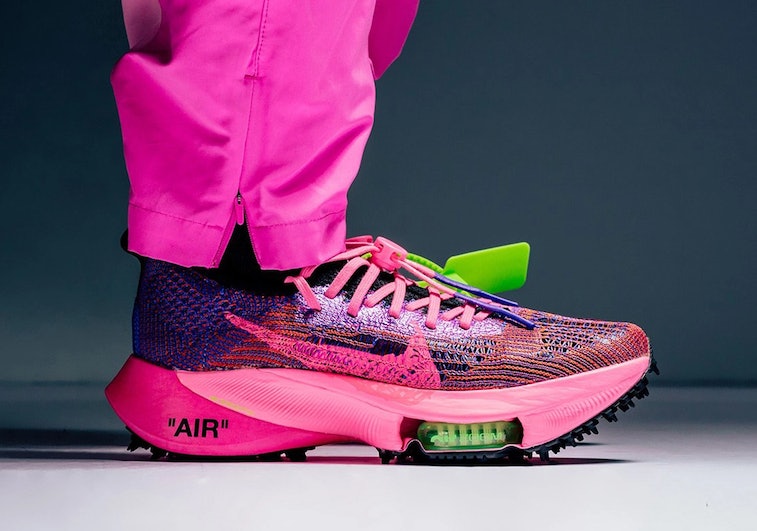 Even posthumously, Virgil Abloh has ensured his influence in the fashion industry remains. After Nike released the late designer’s Blazer Low collaboration — a drop scheduled in accordance with Abloh’s wishes and in partnership with his widow, Shannon Abloh — pairs of the Off-White x Nike Air Zoom Tempo NEXT% have been restocked.

The three sneakers, originally released last July, were initially dismissed by many Off-White fans who found the athletic silhouette unappealing. But a re-release after Abloh’s death all but guarantees both sneakerheads and resellers will be after the Air Zoom Tempo NEXT% with added fervor. The model, known as one of Nike’s most innovative running shoes, features Nike ZoomX foam in the footbed and a visible Zoom Air unit at the forefoot for ultimate comfort. Abloh modified the sneaker with breathable Atmoknit, neon accents, lace toggles, and most notably, spiked outsoles.

Hard to miss — Abloh’s signature Off-White aesthetic plays out across all three color schemes of the running sneaker. Shoelaces come detailed with quotation-marked slogans as zip-ties dangle off the side of the shoe should you choose to keep them affixed. Each sneaker’s Swoosh looks drawn on — nodding to Abloh’s penchant for permanent marker doodling — as the designer’s signature “Air” graphic hits the lateral heel.

An appropriately-named “Scream Green” iteration boasts a black base with white and neon green accents, with the latter shade highlighting the shoe’s track-like spikes. A “Pink Glow” version takes on similar design elements, detailing its fluorescent pink base with a blue, pink, and orange knit upper as a vivid green hits the exposed Zoom bag and zip tie.

Move quick or miss out — All three variations of the Off-White x Nike Air Zoom Tempo NEXT% are available at Abloh’s website for $260, giving shoppers a rare opportunity to score the silhouette without having to participate in draws or pay resale prices. You’ll want to channel the track spikes and sprint to checkout, though, as pairs of the running sneakers might not be around for long.

The surprise release of the Air Zoom Tempo NEXT% trio is a good reminder that more Off-White x Nike sneakers exist— and with any luck, they’ll surface soon. According to Nike, Alboh and his creative trust developed fully realized collaborations and marketing strategies “for seasons to come,” meaning we haven’t seen the last of him just yet.