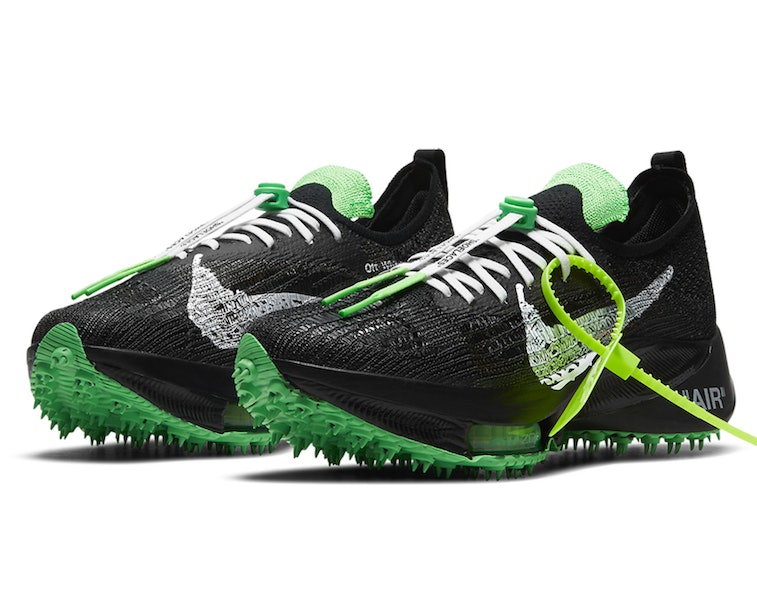 With a surplus of Off-White and Nike collaborations on the way — including 50 different versions of the Dunk Low — Virgil Abloh is stepping away from the Swoosh’s classic silhouettes and putting his spin on some of its running shoes. Official imagery from Nike confirms a trio of Off-White x Nike Air Zoom Tempo NEXT% sneakers are arriving soon in vivid green, pink, and red iterations.

Of course, no consumer will actually run in the shoes: Between their exclusivity and rumored $260 price tag, these Air Zoom Tempo NEXT% sneakers are made only to flex. Consider the track-like spikes on the shoes as decoration.

Bright and lightweight — Appropriately taking on the name “Scream Green,” the first Air Zoom Tempo NEXT% features a black base — made with breathable Atmoknit — with neon green accents on its tongues, lace toggles, and spiked outsoles. Hints of white grace the laces and marker-esque Swooshes while also hitting Abloh’s signature “Air” graphic on the lateral side and collaborative branding on the medial side.

As the simplest color scheme of the trio, the “White/Solar Red” running sneaker really lets its reimagined silhouette shine. A crisp white covers the shoe’s woven upper, highlighting areas with looser knitting for a deconstructed illusion. Bursts of radiant red — which hit the laces, drawn-on Swooshes, and the shoe’s spikes — help bring the sneaker to life. Midsoles somewhat contrast the bright upper with a creamy finish that comes marked with black “Air” branding.

A drop may happen this month — Neither Nike nor Off-White has announced a release date for the Off-White x Nike Air Zoom Tempo NEXT% collection, though it’s rumored the sneakers could drop sooner than expected. The collaborative trio is now expected to release on July 23 to coincide with the opening day of the 2021 Summer Olympics in Tokyo.

While Abloh hasn’t openly shared any strong sentiments about the Olympics, he did attend Nike’s Olympic uniform unveiling this year and has previously cast athletes like track-and-field runners in his own Off-White shows. Given the track-like spikes on the Off-White x Nike Air Zoom Tempo NEXT% runners, a sports-heavy release isn’t unlikely.

In May, Abloh also took to Instagram to tease a new capsule called “Dear Summer” — which he described as “a whole thing.” Yet the only preview shared by the designer was a new box for an unknown pair of sneakers, though the packaging’s matching neon green hits and drawn-on Swoosh possibly align the project with the Off-White x Nike Air Zoom Tempo NEXT% sneakers.

Should we see the collaborative shoes release in a matter of weeks, come prepared: Much like at the Olympics, only the most skilled will walk away with a W.