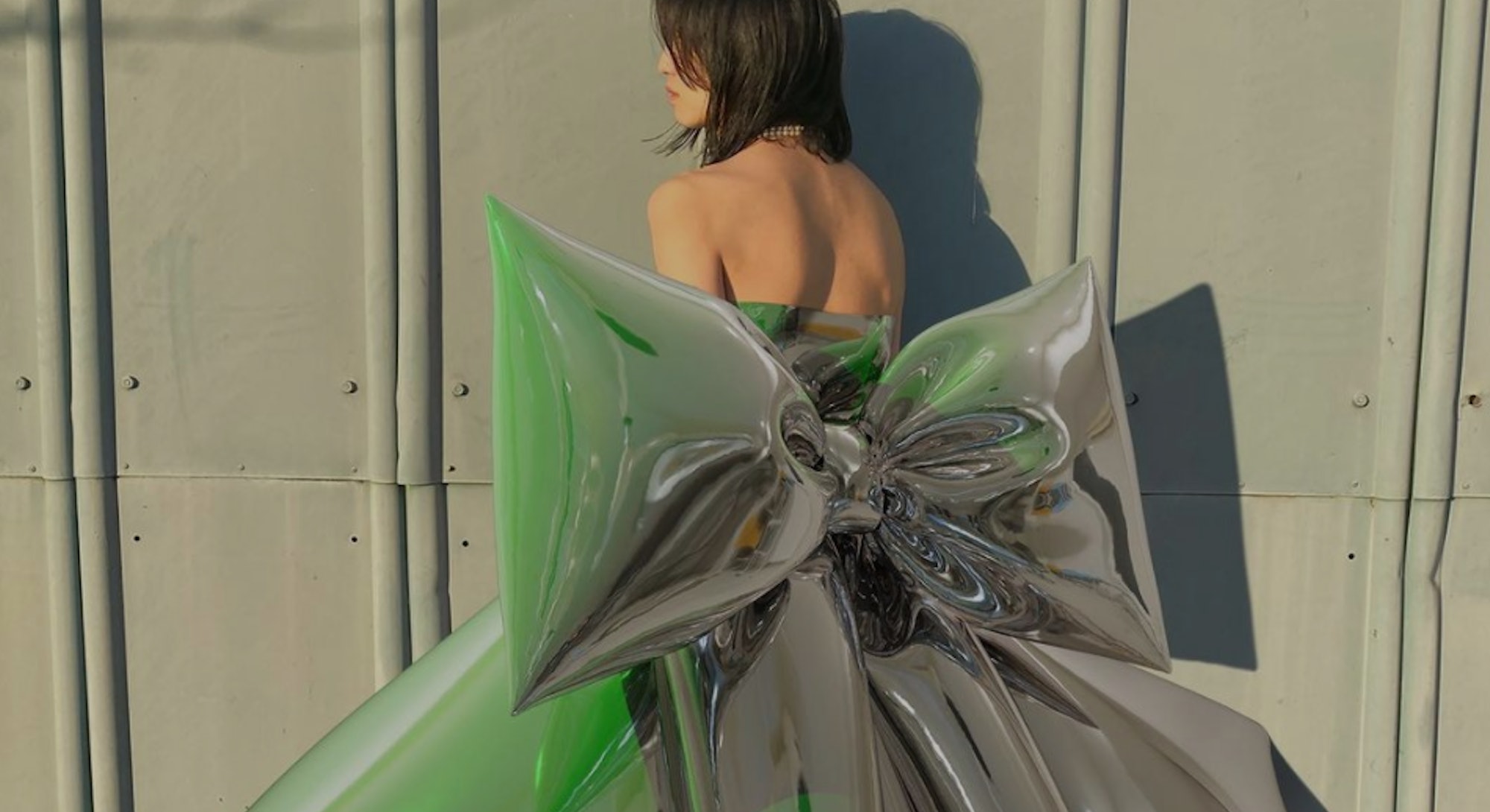 Since the pandemic began, almost every aspect of life moved online — but we never expected our closets to go virtual.

In many ways, though, cyber style is a continuation of a trend we’ve seen accelerated by COVID-19. Most fashion brands have paused real-life catwalk presentations, instead opting for short films or digital showrooms to get their seasonal visions across. Balenciaga crafted a video game, dubbed Afterworld: The Age of Tomorrow, to showcase its Fall 2021 collection, while Gucci partnered with Pokémon to create designer digs for player’s avatars.

The rise of NFTs — short for non-fungible tokens — has also reinforced consumers’ interest in digital fashion. Hype revolves around exclusivity, and the highly limited quantities of NFTs, or digital collectibles, have made them even more valuable than some of their real-life counterparts. The rarity of digital collectibles has also made them suitable for the sneaker world. Now, sneakerheads can own virtual renditions of the rarest and most coveted silhouettes, rivaling the tangible market that treats sneakers as tradable assets.

But even prior to the pandemic, we saw hints of how fashion could exist solely on screens. Digital fashion influencers like @lilmiquela have rocked the latest runway looks from an entirely virtual dimension, while online shopping is making it easier than ever for shoppers to purchase items without ever having to see or touch them in person. Social media — now more influential than ever — has primed us for this new digital age where some of the most desired pieces can’t be held, touched, or worn. So, can the adoption of digital garments really replace the feeling of tangible ones?

Recognizing this evolved consumer behavior, digital fashion label Tribute Brand arrives at the perfect moment. With the style industry feeding us new trends — tangible or not — through screens as small as our smartphones, Tribute crafts designs to exclusively be worn online. The brand’s “contactless cyber fashion,” as it markets its virtual garments, is available for any gender, sex, or size. And like an NFT or coveted sneaker silhouette, the brand’s pieces are limited from anywhere to 30 to 100 pieces, with no reissues.

“We do things we like, and [create] things that we couldn't wear before.”

Launched in April 2020, Tribute’s work was bolstered by the pandemic’s online shift, but its creators had set their eyes on a digital brand long before that. “We'd been experimenting with digital fashion for a while at that time, and realized it was time we show the things we do to everyone,” Gala Marija Vrbanic, the founder and creative director of Tribute, told Input. She is one of four people “at the core” of the brand, and together, they have backgrounds in fashion, IT, engineering, and digital experience design.

Despite Tribute’s wild, sci-fi-like designs, Vrbanic said the brand doesn’t have an exact point of inspiration — rather, “we do things we like, and [create] things that we couldn't wear before.” Unlike traditional, tangible products, Tribute’s designs don’t adhere to natural laws like gravity or earthly materials, and can take on never-made silhouettes accordingly. Shoppers can now choose to don floating pants or flame-engulfed dresses if they so choose.

Customers can browse Tribute’s digital-only marketplace as they would with any traditional online store. When they buy their selected cyber clothing — which can cost as little as $29 to as much as $699 — they also submit a photo of themselves in skintight or minimal clothing, much like the before stage of a dress-up doll. Then, digital tailors will “dress” their image and send it back to the consumer within five business days — about the same amount of time it would take another company to ship a real garment.

While Tribute’s typical customers are those already in the public eye, the brand itself is quite private behind-the-scenes. The actual editing process cannot be “publicly disclosed,” Vrbanic lamented. Only “designated employees” are allowed to work on the image submitted by the consumer, reads the brand’s website, noting that a “customer has the right to request amendments, additions, or the deletion of personal details at any moment.”

With each piece limited to one image of the consumer, Tribute Brand only formalizes the mentality of “purchase, Instagram, return” in consumers whose online persona requires constant newness. “[Our consumers] are the people whose natural habitat are virtual worlds,” noted Vrbanic. “They show their true identity there — not on the physical world's streets.”

But the online world — specifically influencer culture — has sped up trends and urged fast fashion companies to produce (and discard) new items at a relentless, insatiable pace. Even “sustainable” collections, between physical deliveries and the overconsumption of consumers, are inherently sustainable. Tribute is grappling with the climate consequences of the very culture it profits off of, labeling itself as zero-waste by creating clothes from pixels, rather than textiles. After all, if images themselves are digital, why buy physical fashion at all?

“[Our consumers] are the people whose natural habitat are virtual worlds.”

More people will join in on the digital fashion revolution as they spend more and more time in virtual worlds, said Vrbanic. And with an unclear vision of the world post-pandemic, the number of people joining virtual worlds — whether they be Instagram, TikTok, or video games — is bound to increase significantly, as it already has. As of now, though, Vrbanic remarked, “a kid who is playing [digital] games doesn’t care about in-real-life trends, but about how his avatar looks.” Likewise, Tribute is making clothes for people who see their online persona as an extension of themselves — a tribute to their tangible selves, if you will.

Brands like Tribute have created “a new reality for consumption,” Agus Panzoni, a trend researcher with more than 176,000 followers on TikTok, told Input. She began noticing the uptick of exclusively virtual trends about two to three years ago, but noted fashion’s “digitalization was accelerated because of the pandemic.” While traditional fashion labels often look to the past for inspiration, digital fashion doesn’t have to abide by the laws of physics, giving consumers “new realms to explore,” she said. Those realms, however, may be as limited as the virtual pieces themselves.

Through her research, Panzoni has noted cyber fashion picking up in countries like the U.S., Europe, and China — but neither influencer culture, nor the internet, are available worldwide, meaning digital fashion isn’t as accessible as it markets itself as being. While anyone can model a virtual garment despite their size, sex, or gender, factors like socioeconomics still come into play, Panzoni said.

In response to the growing demand for digital goods, Gucci released a slew of augmented reality sneakers, which came as a package of 25 pairs available for as low as $9. The footwear may have been the cheapest Gucci item to ever exist — but “how much value are you getting from the digital piece, as opposed to a [traditional] piece?” Panzoni asked.

Although it may seem otherwise on Instagram, not everyone is buying clothing simply for photos. Even $9 for a virtual sneaker is pricey — especially considering that’s what you’re paying for a one-time image of a non-functional product. While the pandemic has bolstered digital fashion, it’s also created a huge economic divide, said Panzoni, who comes from Argentina. “Only those who have money can afford to buy digital fashion on top of real clothing,” she noted. “I think that’s something we don’t think about a lot, living in the U.S.”

“It’s just another kind of consumption.”

And while brands like Tribute provide a new reality for consumption, as Panzoni puts it, they still don’t solve the consumer problem of overconsumption. “It’s just another kind of consumption,” Panzoni notes, adding that while cyber fashion is just that — online — that doesn’t necessarily make it any more sustainable. Should digital fashion brands choose to enter the world of NFTs, making their designs exclusive to consumers and available to the digital secondary market, they could end up polluting the planet just as much as their tangible counterparts.

Major marketplaces for NFTs conduct their sales through Ethereum, which maintains a secure record of cryptocurrency and NFT transactions through a process called mining. Similar to the system that verifies Bitcoin, mining involves a network of computers using advanced cryptography to decide whether transactions are valid — and in doing so, uses energy on the scale of a small country, majorly contributing to carbon emissions. “The way that [brands like Tribute] operate now are sustainable,” Panzoni said. “But I think the digitalization is going to continue.”

A TikTok, recommended by Panzoni, breaking down NFT’s unsustainability.

Especially with the pandemic leaving the future of the real world uncertain, it seems people are taking a page from Elon Musk’s book — but instead of going to Mars, they’re going online. Generations, particularly Gen Z, Panzoni said, can see a “physical reality versus a virtual reality.” And with the pandemic forcing us to stay at home — or perhaps not our ideal locations — the divide between our online personas and our real ones is only growing.

Although social media apps have helped divide ourselves into various counterparts — professional on LinkedIn, family-friendly on Facebook, and “cool” on Instagram — digital fashion brands are now blurring the lines between reality and fantasy, creating an exclusive virtual world for entitled consumers. Soon enough, we could all be turning into influencers like Lil Miquela — if our budgets allow.