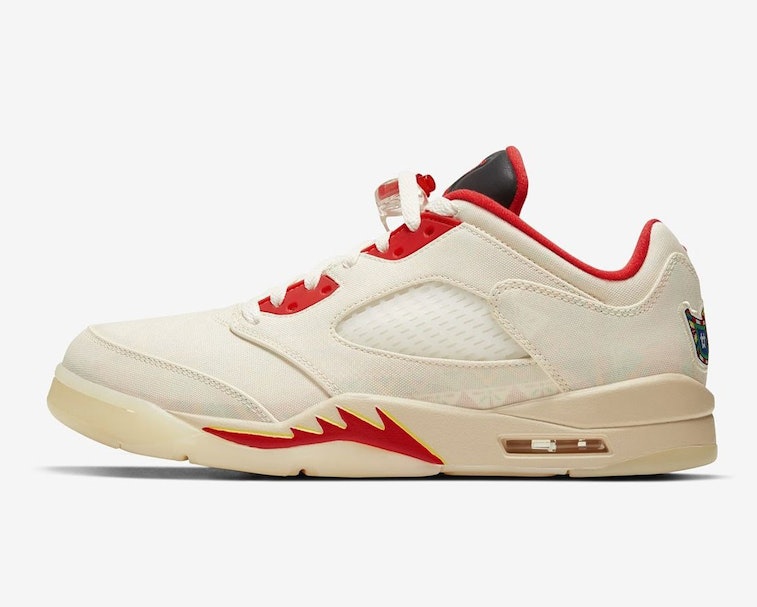 Nike has cooked up an Air Jordan 5 for Chinese New Year that will become more rewarding with wear. Underneath the low-cut sneaker's white canvas is an intricate pattern that encourages you to wear the sneaker into the ground. Faint outlines of it can be seen through the upper, but to see it in its true glory the top layer will have to be scuffed away.

The Air Jordan 5 Low "Chinese New Year" follows the lead of other iconic wear-away sneakers from Nike, including the "Cheech and Chong" Dunk and "Lance Mountain" Air Jordan 1. While the hidden layer encourages its wearer to put the sneaker to good use, some sneakerheads have taken a shortcut by buffing away the top layer themselves.

This is the first time Nike has chosen the Air Jordan 5 Low for the holiday since 2016, when it released a pair inspired by kites, a symbol of good luck in Chinese culture. You may want to fly a kite or two if you hope to secure this year's release, as Chinese New Year sneakers are highly covetable — even without the wear-away treatment sneakerheads love.

There's plenty to appreciate brand-new — The off-white sneaker will look great straight out of the box, thanks to red detailing and even more scant traces of yellow. Thin yellow trim surrounds the shark-tooth panel on the midsole, which was inspired by the WWII P-51 Mustang fighter jet as a nod to Jordan's dominant style of play.

On the heel, you'll find a special patch featuring the Jumpman and Chinese characters. Another "Air Jordan" banner also appears inside the tongue and flipped upside down. The word "Action" also appears underneath the upper's signature netting, along with other words that can't yet be made out. If you land a pair you may want to take a razor blade to the netting — similar to what Virgil Abloh encouraged for his own Air Jordan 5.

Set to arrive before the holiday — Chinese New Year will occur on February 12, but the Air Jordan 5 for the occasion will reportedly drop well beforehand on January 23 for $215. Details about where the sneaker will release have yet to be announced, but you shouldn't have to worry about it being exclusive to China. In all likelihood, you'll have every opportunity to be disappointed by the SNKRS app once again.