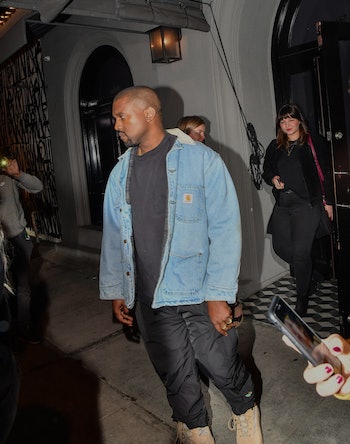 Carhartt, Dickies, and Wranglers used to be the attire of craftsmen and manual laborers. Now those brands line the walls of Urban Outfitters.

For decades, utility-focused workwear has been appreciated for fashion over function. In the ‘90s, overalls and coat chores were worn by hip-hop legends like The Fugees and Tupac, while queer communities embraced workwear for its baggy, androgynous look. The ‘00s saw skaters and cholo culture take over the trend next, often mixing boxy labor-like pieces with wifebeaters and low-top sneakers.

Yet the popularity of social media — which circulates trends and influences in a matter of minutes — had helped workwear break out of its past subcultures, making the style more mainstream. Now, everyday labor uniforms are worn outside their traditional, historic settings: Utility-focused pieces are popping up on the runway, on celebrities, and on the racks of streetwear boutiques.

The fashion industry doesn’t share the practical mindset of workwear — it’s about what looks good, not how something functions. Focusing solely on style, however, may be harmful to pieces created for utility. As workwear gains popularity outside of its target demographic, one has to wonder when its adoption becomes problematic. Is there an issue with the glamorization of someone’s work uniform? And will that glamorization lead to increased prices for those who actually wear utility-focused styles for practicality?

Already, traditional workwear brands like Carhartt and Dickies have seen more love for the “high-end” versions of their labor-inspired outfits. Streetwear brands like Opening Ceremony, Stüssy, Madewell, and Union have collaborated with Dickies, while the workwear brand’s recent acquisition by VF Corporation (which owns brands like Vans and Supreme) will likely offer Dickies more opportunities to grow within the fashion industry.

On the other hand, Carhartt’s own Work in Progress line — which has been around since 1994 — has recently been embraced by Kanye West, Shia LaBeouf, Bella Hadid, and Jonah Hill, alongside anyone else willing to pay over $300 for classic pieces like chore coats and carpenter pants.

As premium-paying, aesthetic-seeking consumers bring in quick profit for workwear brands, companies have to make sure they don’t stray from their workwear roots. Doing so would risk alienating their core consumer base of real workers — without whom they wouldn’t exist.

Phil Courtman, 42, has worked in roofing for 25 years, most of which he’s worn Carhartt. The brand’s canvas pants protect him from getting burnt by hot tar — which melts through synthetic fabrics onto skin — while its cotton tees offer breathability. “Roofing is like riding a bike, except the bike is on fire and you’re in hell,” Courtman told Input, emphasizing the heat of the job. The day after speaking with Input, he anticipated working a job in over 100° heat.

Similarly, Courtman’s wife Mona, 44, wears brands like Carhartt and Dickies while gardening. Having worked in landscaping for eight years, she likes the comfort of double-kneed pants, claiming the style keeps her cool when “getting down and dirty.”

For both Phil and Mona, workwear pieces serve as a daily uniform, not a fashion statement. “I don’t go out to dinner in my Carhartt pants,” said Mr. Courtman, “but I guess [other] people do.” The trend is “funny” to the couple, they say, but it’s easy to see the appeal of workwear: “When we wear [workwear], we feel good in it — you have the whole outfit,” explained Ms. Courtman, describing the put-together look of her canvas pants and boots. Still, neither said they would wear their utility-focused clothing for style. Who would want to wear their work uniform after hours?

Prior to speaking with Input, neither Phil nor Mona had ever heard of Carhartt Work in Progress, much less paying over $300 for cargo pants. “I would never pay that much for [workwear],” Mr. Courtman told Input. “Unless it came with a car, or maybe protection from radiation.” Carhartt is already expensive, he lamented, adding that the price of his canvas pants has increased from $60 to $85 over the years. The change, however, isn’t a result of people wearing workwear as fashion — it’s simply inflation, Mr. Courtman maintained.

With practicality in mind, the Courtmans shop for their workwear at outlets, only buying from official Carhartt stores for pieces they wouldn’t wear on the job. “Our workwear gets really damaged,” said Ms. Courtman. It wouldn’t make sense to spend hundreds on work clothes if they had to be replaced every six months, which is about how long their pieces last, she said. “We’re the [real] work in progress,” added Mr. Courtman.

It’s true — consumers are paying hundreds, or even thousands, to get the same look as the Courtmans. Over the past few years, distressed styles have skyrocketed in demand, glamourizing ripped apparel and pre-dirtied sneakers. The worn look gives off an “effortless” vibe, ironically (or stupidly) contrasting its high-end pricing. It really gives new meaning to “filthy rich.”

Workwear silhouettes are meant for function over fashion, Theresa Massony, senior style editor of Elite Daily, told Input. While she first noticed utility-focused pieces in the ‘90s, she said the past five years have seen the workwear trend grow in popularity: “Hipsters in metropolitan areas love brands like Dickies, Carhartt, and even Wranglers and Dockers,” Massony explained. And a few years ago, major fashion labels like Celine, Vetements, and Stella McCartney were sending uniforms and boiler suits down the runways, she added.

The homogenizing nature of workwear allows it to fit in with trending unisex and gender-neutral fashion. “For me, as a lesbian, it allows me to explore a gender-free style while still feeling safe,” Massony said. “I think [utility-focused pieces] are very easy building blocks to embrace androgynous style.” Even outside of the LGBTQ+ community, she noted, workwear has thrived. “It’s foolproof,” she said. “That’s why it’s so widely appealing.”

Whether it be Dickies pants, Docker’s button-ups, or a Wrangler jean jacket, labor-inspired pieces “work for everyone,” Massony added, noting the inclusive size range of workwear brands. The styles are very versatile, she said — while each uniform-like style offers a put-together look, the outfits can be made personal through colors, bandanas, patches, and more. For this reason, Massony said she can see the styles sticking around for the next decade, taking into consideration their role in decades past.

Since workwear was first introduced — around 1922, according to Dickies — the fashion world has interpreted the utility-focused styles in its own way. When women joined the industrial workforce in 1943 as a result of World War 2, men’s workwear pieces trickled into fashion trends. The ‘60s and ‘70s adopted labor-inspired styles like overalls and boxy silhouettes, while the ‘80s saw workwear staples incorporated into street style. By 1992, skaters embraced Dickies pants for their toughness — and now, workwear isn’t necessarily tied to “subcultures,” Massony notes.

Unlike the groups who originally embraced workwear, modern shoppers admire labor-inspired pieces for their look, rather than their function. Practicality isn’t a necessity (or a common feature) when it comes to fashion, pricing included. Consumers are paying hundreds of dollars to wear pieces that are already distressed and falling apart.

The popularity of utility-focused styles may die down soon — but if it doesn’t, those who actually wear the pieces every day will pay the biggest price of all. Brands producing workwear have to be mindful of their first customers, Massony warned. Workwear “is attached to people’s livelihoods,” she said. “It’s important to remember — and inform other people — about the roots of this trend.” Without the people wearing Dickies and Carhartts for function over fashion, workwear simply wouldn’t work.