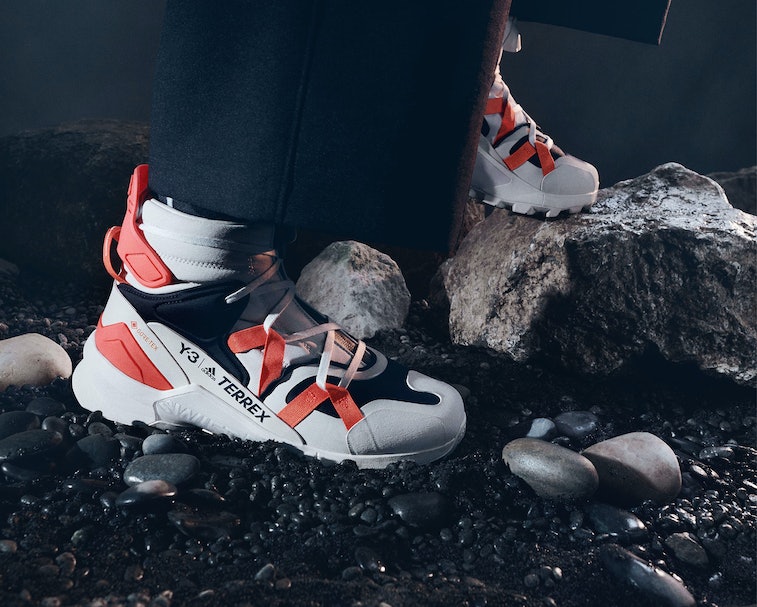 Y-3, the fashionable sportswear line from Japanese designer Yohji Yamamoto and Adidas, is turning to another offshoot from the Three Stripes banner ahead of winter.

Together with Adidas Terrex, Y-3 is launching a brand new sneaker-boot silhouette that’s as menacing in its appearance as it is in function. The Swift R3 GTX boasts a GORE-Tex lining and membrane for waterproofing as well as a Continental outsole favored in the outdoor space for its traction in both wet and dry conditions. To keep your feet secure, a wide lacing system is combined with a zip closure, underneath which is a neoprene gusset that’ll hug you like a sock.

The Swift R3 GTX will come in a “Bold Orange” and white color scheme that’s every bit as fetching as the name implies, as well as a predominantly black version more in line with Y-3’s dark aesthetic. Either should hold you down in the bitter months ahead, and it’s never too early to begin thinking about your footwear for sleet, snow, and salt.

Two new jackets are also on the way — Y-3’s small Adidas Terrex capsule will also include two GORE-TEX-equipped jackets to take you through fall and winter. The Rugged GTX Jacket is ideal for wind and rain and is constructed with 100-percent recycled nylon plain weave. Better suited for more intense conditions is the Melton GTX Down Parka, which makes use of GORE-TEX’s waterproof Melton wool along with nylon and insulation consisting of 90-percent goose down.

While the jacket looks more like an out-and-out outdoor piece, the parka comes with a healthy amount of drape to bridge a city-ready look with high-level winter functionality. Both also hide pocket bags attached with webbing tape, which are stored inside the zippered side pockets.

Pricing has yet to be announced for the stealthy capsule of waterproof gear, but all three pieces will become available October 14 through Y-3’s website, Adidas’ Confirmed app and physical stores, and select other retailers. If you’re prone to favor black in favor of color no matter what the season, this may be the best winter apparel you can find this year.