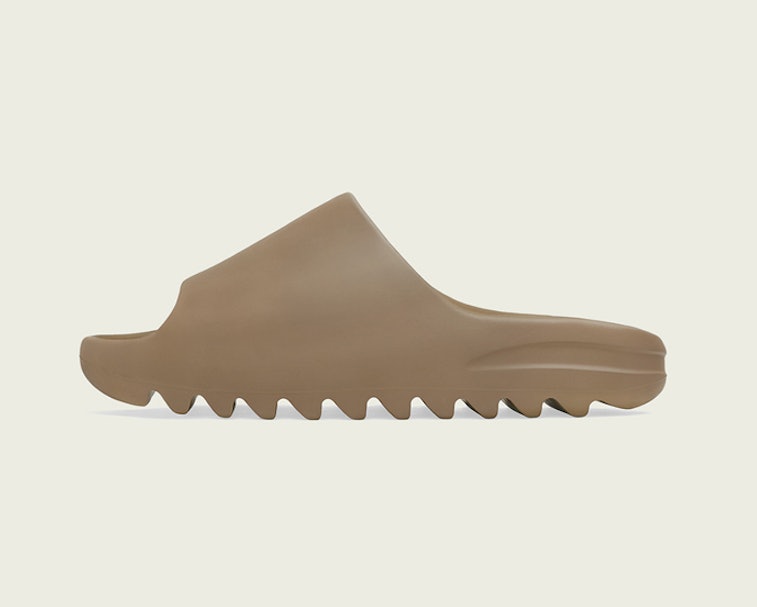 If being stuck at home hasn't given you a new appreciation for comfortable house shoes, you may be doing it all wrong. And, as controversial as Kanye West is, his Yeezy brand is undoubtedly creating some of the best (ugliest?) styles right now. Enter the Yeezy Slides, which originally dropped in December of 2019 and feature a lightweight, EVA foam construction that's designed to make your feet feel super cozy. Think of them as a soft bed for your tootsies. At $55, these Adidas x Yeezy sandals are a no brainer, and those of you who missed out on the initial drop will now get another chance at them on September 4 — in a couple of new colors called "Core" and "Soot."

Understated — As with the original "Bone" and "Resin" Yeezy Slides, these new flavors take on a similar "earth tones" aesthetic, one that Kanye has made a core part of his brand's entire design ethos. Color-wise, they're more subtle than the wild, Chewbacca-inspired Yeezy prototypes he's been teasing lately, although you can also see certain similarities in details like the "shark teeth" midsoles.

The Yeezy Slides are a great silhouette for when you're just hanging out at home, or if you're feeling adventurous and want to take them on a quick trip to your nearby bodega — but house shoes should be house shoes, so the less you take these outside, the better. It's best to keep them clean, pristine, and COVID-19-free.

The more, the merrier — Nike, too, is getting in on the cozy shoe season: The sportswear giant dropped its massaging Offline mules early on Friday morning, and the $120 pairs with beaded insoles sold out within minutes. As Adidas describes the Yeezy Slides, "The outsole utilizes strategic groove placement for optimal comfort and traction," and while they may not have the same nubs as Nike's Offlines, their foam footbed won't leave anything to be desired.

What might be the best feature of the Yeezy Slides, however, is that Adidas made them extremely affordable. They're hard to beat at $55, but you better hope you get lucky on September 4, otherwise you'll have to spend a couple hundred dollars on the sneaker resale apps. Time to bookmark Adidas' Yeezy site and hope for success.

Beyond Yeezy — In other news, Adidas had a few hyped sneaker drops scheduled for the weekend of August 29, but the brand announced on its new Confirmed app that it is postponing them until further notice as it "stands in solidarity with athletes, coaches and cultural leaders driving positive disruption and demanding justice for the senseless shooting of Jacob Blake and the many whose lives have been impacted by systemic racism." Additionally, the company said, "Donovan Mitchell [one of its signature NBA athletes] and Adidas will donate all proceeds from the sales of the D.O.N. Issue #2 launching today, up to $90,000, to a college scholarship fund for the children of Jacob Blake."