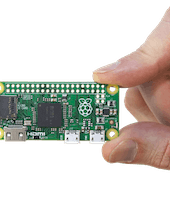 The cost of the tiny computer that ventilator makers are using to beef up the dwindling supply.

Raspberry Pi microcomputers are well-known amongst hobbyists. Do a search for the tiny computers and you'll find hundreds of fun and useful DIY projects anyone can create. One build nobody expected it to be used for: life-saving ventilators.

As the demand for ventilators outstrips supply, ventilator makers are turning to low-cost alternatives like the Raspberry Pi to power their machines. According to Tom's Hardware, the Raspberry Pi Foundation has increased production for all of its Pi computers with demand for its cheapest computer, the $5 Raspberry Pi Zero, seeing shortages.

Speaking with Tom's Hardware, Raspberry Pi Foundation founder and CEO Eben Upton says they produced 192,000 Pi Zero and Pi Zero computers in Q1 of this year and plan to increase production to 250,000 in Q2.

The Pi Zero and Pi Zero W, which cost $5 and $10, respectively, are seeing surging interest by ventilator makers due to their low prices. Ventilators, as it turns out, don't really need big and expensive computers with powerful processors or lots of cores. The computer just needs to do one thing: keep a person alive.

"I believe the interest in Zero is mostly down to it offering enough compute for the relatively modest requirements of a ventilator (potentially control air-handling components at fairly low frequency, handle a simple user interface)," Upton toldTom's Hardware.

"Although I know some of the approaches out there (not sure if we're engaged with any of these) aim to scale production of the sort of lightweight ventilator they use in ambulances, so size may also be a factor."

Tech rising to the challenge — The world is now grappling with the scary reality that there simply aren't enough ventilators to go around.

To help battle COVID-19, tech companies have been using their resources to help in myriad ways. Dyson, for example, is making ventilators. Automaker giants GM and Ford are also using their factories to build ventilators as well.

Elon Musk pledged last month he'd be donating 1,000 ventilators to California hospitals. But as Gov. Gavin Newsom has clarified: the state hasn't received a single ventilator yet. Either Musk lied or he hasn't been able to reconfigure Tesla factories quick enough to churn out ventilators as promised.

Meanwhile, even smaller tech companies are doing their part to help. Boutique PC maker Maingear unveiled a compact ventilator last week made of 3D-printed parts, PC components, and an NVIDIA Shield tablet. Maingear CEO Wallace Santos said the ventilators cost 25 percent the cost of a typical ventilator. He later confirmed to Input each machine would cost about $7,000 compared to the ventilator's usual $25,000 to $50,000 price.

More like this
Tom Caswell
5.5.2022 4:58 PM
Game over
Inside the colossal failure of VENN, the ‘MTV of video games’
Jackson Chen
5.13.2022 4:57 PM
Tech
Aura Strap 2 adds body fat, muscle, and water-tracking to Apple Watches
Andrew Paul
16 hours ago
:(
Mastercard thinks forcing you to smile for capitalism isn't creepy at all