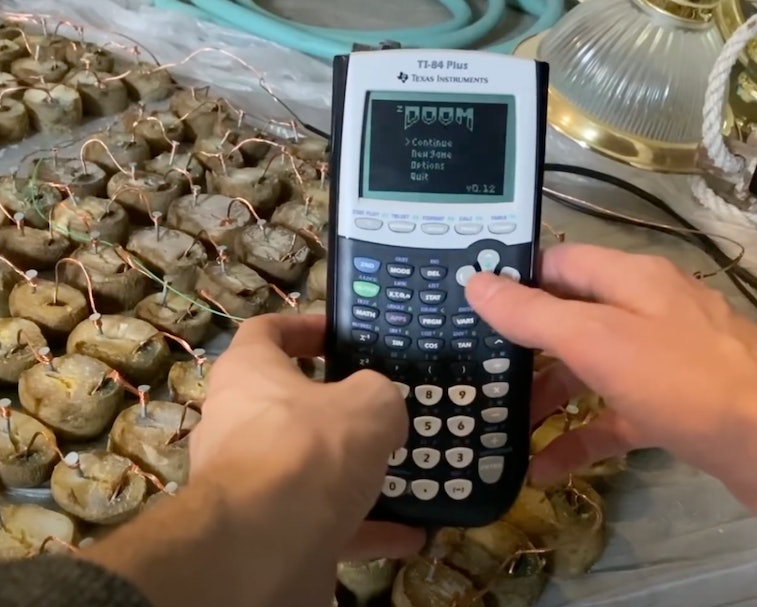 It's sort of become a meme to benchmark devices based on their ability to run the classic game Doom. Apple Watch, treadmills, even refrigerators have been proven to run versions of the first-person shooter. But to take it one step further one must ask, what is the most ridiculous source of energy you can power Doom on? Thanks to the pioneering work of a YouTuber by the name Equalo, we now know that a hundred pounds of rotting potatoes is enough to do the trick.

Spud power — Equalo started out his experiment trying to power a Raspberry Pi Zero with Doom loaded on it using just potatoes, but found that it would require nearly 800 of them to power the mini-computer. Instead, he landed on using the trusty TI-84 calculator, which many remember fondly for its ability to play games.

It's a common experiment in grade school to demonstrate how potatoes can generate electricity. Phosphoric acid in the potatoes creates a chemical reaction when you stick a zinc-plated nail into one end of the potato, and a copper penny into the other. They really don't produce much energy though, so generating the five volts of power necessary to power a Raspberry Pi requires a lot of potatoes. Thankfully the TI-84 needs much less energy and the hundred pounds of spuds that Equalo bought were sufficient.

But at what cost? — Rotting wasn't necessary in this equation for the potatoes to succeed at powering the calculator. That only happened because Equalo spent a week with the potatoes sitting in his garage while he tried to make the experiment work. They were boiled beforehand because that breaks down the starch and magnifies the energy.

Apparently, after a week, a hundred pounds of rotting potatoes smells pretty rank. Go figure. In the end Equalo said the success wasn't worth it. "I do not feel rewarded at all for this experience. It punishes you. It's an abusive relationship." Equalo, we thank you for your service.