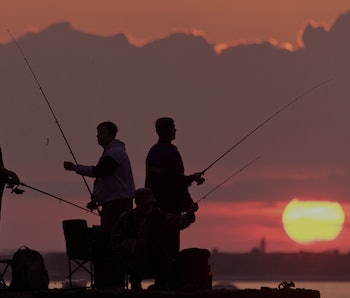 A man in Germany recovered an iPhone 12 from a muddy canal using a magnetic fishing line. The phone still worked once it was retrieved, thanks to its IP68 waterproofing.

“Something happened tonight,” recounts Frederik Riedel. “A friend of mine dropped his iPhone 12 Pro in the canal in Berlin. It disappeared in the mud. He waded through the 3ft deep water. No way to find it. But he found a Nintendo Switch instead.”

Leaving aside the fact that he managed to nab a free (though inoperable) Switch, Riedel goes on to say that he and his friend had the smart idea of throwing a magnet on some fishing line into the muck. The iPhone 12 has a MagSafe connector on its rear, after all. Lo and behold, it did the trick, and the wayward iPhone was caught like a fish.

Yay, magnets — Magnet fishing is commonly a hobbyist’s method to unearth buried treasures, though some view it as a way to protect and improve the environment by removing debris from waterways. Depending on the size of the magnet and its pulling force, one can catch some substantial objects.

Fortunately for these fishermen, the iPhone 12’s got a magnet in its casing, which helped to create a strong pulling force in this instance (the attraction between two magnets is stronger than that between a magnet and a metal). The magnet was added to the iPhone 12 for improved wireless charging (and so that users can add accessories like wallets to their phones without needing a case). The iPhone could already charge wirelessly, but a magnet helps align the phone on a charger and to keep the charger connected should you pick up your device.

Perhaps we should start carrying a magnet on some fishing line in our bags, if not for our own use, so we can help other iPhone fumblers in their hour of need.