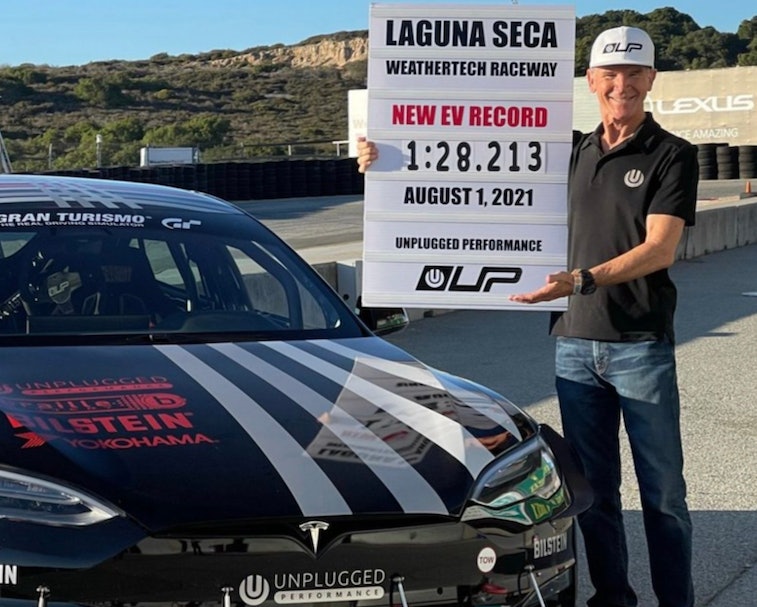 Tesla says its Model S Plaid is the highest performing sedan ever built, and a new test seems to prove it. Aftermarket tuner Unplugged Performance took a modified version of the Model S Plaid to California’s Laguna Seca raceway and set a new record for the fastest electric vehicle on the track. Electrek earlier reported the news.

Not only that, but the Plaid’s lap time of 1:28.213 put it just behind the McLaren Senna supercar... which is a pretty great advertisement not just for Tesla, but for EVs more broadly.

Modded — The Model S Plaid has a 0-60mph time of two seconds, with top speeds of 200mph. With its faster acceleration, the Tesla could potentially beat out a McLaren. But it was heavily modified for the track with race-specific suspension and a large front spoiler and lip. Fresh off the production line, the Model S Plaid is likely still edged out. But with a lap time of 1:27.6, the McLaren only has a lead of about a second.

Other cars have beat McLaren’s record, but it remains number one for production cars. The only vehicles to do the lap faster have been purpose-built race cars that didn’t go into mass production.

The Model S Plaid offers a lot in the way of horsepower, but what makes a track car fast is also how it handles and brakes. Tesla’s upcoming Roadster sports car will likely offer even better performance track performance as the automaker is promising top speeds over 250mph with a 0-60mph just under two seconds. But it will also be smaller and lighter, which should help on a track. The Model S Plaid is a bus by comparison.

It would be more interesting to see the track time for a standard Model S Plaid, sans modifications. In its own tests at Laguna Seca, Tesla managed to hit 1:30 with prototypes of the Model S Plaid.

Electric promise — Either way the speeds are impressive and demonstrate how battery motors benefit from instant torque and power. Tesla isn’t even in the business of manufacturing “sports car” vehicles like McLaren or Porsche and it’s still putting up impressive numbers. In case there was any doubt that electric cars can be practical and fun. This is what’s made Tesla a hit in the first place — Elon Musk proved that EVs don’t have to be boring or slow. You know, like a Prius.