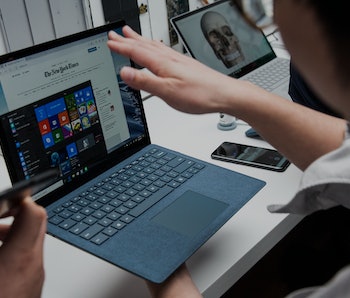 As the new year ushered in a wave of new job openings, one, in particular, grabbed everyone’s attention this weekend. In its hunt for a senior software engineer, Microsoft revealed how seriously it’s taking the long-awaited Windows UI redesign, according to Windows Latest. The already edited job listing originally described the upcoming changes as a “sweeping visual rejuvenation of Windows.”

Windows 10X — Windows Central’s comprehensive coverage of the highly anticipated Windows X has included everything from the inclusion of Android apps to the UI design referred to as "Sun Valley." Of course, Microsoft has promised us the moon before and turned up empty-handed, but this listing for the Windows Core User Experiences team suggests that it’s finally making good — or at least trying its best.

“On this team, you’ll work with our key platform, Surface, and OEM partners to orchestrate and deliver a sweeping visual rejuvenation of Windows experiences to signal to our customers that Windows is BACK and ensure that Windows is considered the best user OS experience for customers.”

A reshuffle in the company last year put Panos Panay at Windows’ helm. The former head of Surface knows that innovative hardware is nothing without software to match and vice versa. That understanding and fervor have clearly lit a fire under the Windows team, and we’re going to discover the fruits of this labor sooner rather than later.

Between the pandemic cementing Microsoft’s seat at the remote work table (for better or worse) and the modern app icons rolled out last year, it’s clear there’s enough confidence and talent for an impressive debut. Assuming as much attention is gets paid to what's under the hood as the hood itself, that is.

CORRECTION: Windows Latest was the first outlet to cover the job listing. An earlier version of this article originally attributed The Verge.