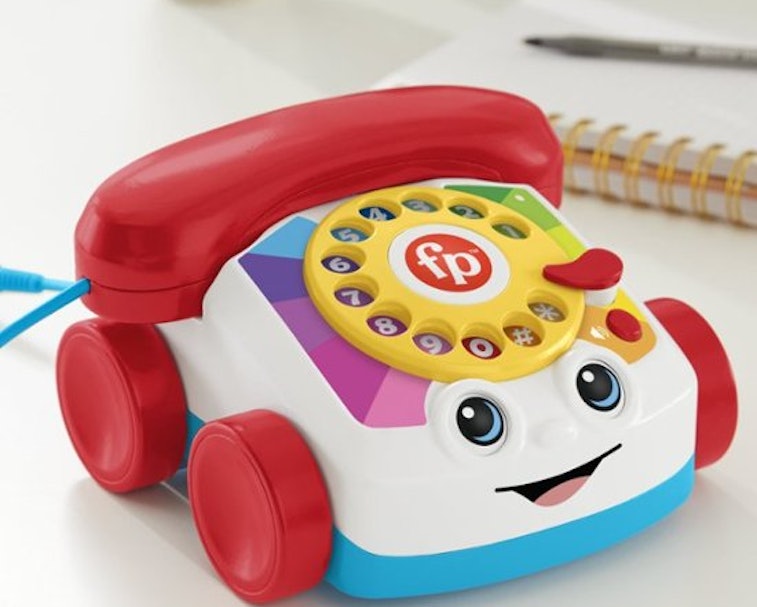 You’re probably familiar with the Fisher-Price Chatter Telephone, even if you don’t know it by name. The iconic toy phone features a big, red handset and a colorful rotary dial. Telephone tones and other sounds play and encourage children to interact with the retro-style phone, encouraging them to practice fine motor skills as they place the handset on the receiver — or drag it all across the floor in one piece.

But what if the phone worked as an actual telephone? You know, for grown adults who wish they were anything but. Fisher-Price is making that idea a reality with a working Chatter that you can use to take real, totally serious calls.

The special edition “Chatter Telephone with Bluetooth” is just what it sounds like — for $60, you get a Chatter that can make and receive actual calls. Just pair with your Android and iOS smartphone, and a voice from the phone will say, “Hi there, good to go!”

The Chatter rings for incoming calls, which can be answered simply by picking up the handset. Outgoing calls can begin by dialing the rotary. There’s speakerphone support if you want to go hands-free.

We can only imagine walking around the house, closing a major business deal on this thing. Or the satisfaction of slamming down the receiver when a call doesn’t go your way and you want to put the pressure on.

It’s funny to consider that some people who might want to buy this novelty won’t even know how to use a rotary — fortunately, the phone reads every number you dial aloud, so you’ll have some reassurance you’re not about to call a random stranger.

Release from reality — Maybe the phone will also appeal to adults struggling with life’s trials and tribulations and seeking some levity. Apparently, it’s been a pretty common trend for adults to buy toys for themselves throughout the pandemic. We just hope not to be the person who gets fired from their job over a call taken on their Fisher-Price phone’s big, red handset. At least the eyes wobble when the wheels roll, so you’ll be able to comfort yourself with some innocent fun afterward.

The Bluetooth-enabled Chatter is available for preorder from Best Buy, though a release date has not yet been announced. CNET received an early unit for testing and reported it works just as expected.