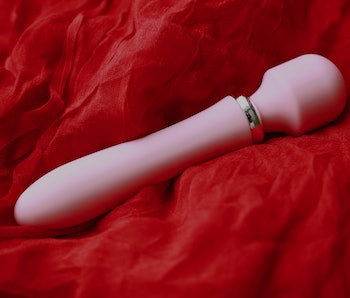 A candidate for mayor of Albuquerque, New Mexico was interrupted during a campaign event this week when a drone wielding a sex toy flew near the stage. After the owner of the event center grabbed the drone, its operator got on stage and began throwing punches at the candidate, New Mexico sheriff Manuel Gonzales. Yes, this is all true.

The incident was captured in a video of the event posted on Facebook, which the Journal goes on to describe:

Video of the event posted on Facebook shows a woman who identifies herself as a social worker asking the sheriff, who is running for mayor on a tough-on-crime platform, what he will do to make lives better for minorities if he's elected. The woman – holding a sign that says “the unsheltered need beds, the sick need meds, we have no need for more cops, guns and feds” – said the last year has shown that minority leaders should be listened to and that more should be done to increase the presence of social workers rather than police officers.

Then, as Gonzales started to answer her a drone bearing the sex toy buzzed toward the stage.

“Is that a dong on a drone?” a woman in the audience asks, as people giggle, murmur and glance around.

The operator of the drone, 20-year-old Kaelan Ashby Dreyer, reportedly called Gonzales a “tyrant” during the scuffle before being removed from the stage by police. The young man was charged with petty misdemeanor battery and misdemeanor resisting, evading, or obstructing an officer.

“There was nobody there (in the audience) that you could digitally see operating the drone,” Gonzales told the Journal. “But I saw him glancing over with a smirk on his face. And when I made eye contact with him, he kind of looked down. So that to me would indicate that he was the operator of the drone.” The punches that followed apparently weren’t too strong and Gonzales walked away unscathed.

We stan — After the debacle that was ripped straight from The Onion, Gonzales’ campaign placed blame on his rival’s campaign, which denied the accusations. Gonzales said he would not be intimidated by a sex toy-wielding drone.

By the sounds of Gonzales’ “tough-on-crime” platform, which usually translates to over-policing and filling prisons, we’re not sure whether Dreyer should be deemed a criminal or a true hero.