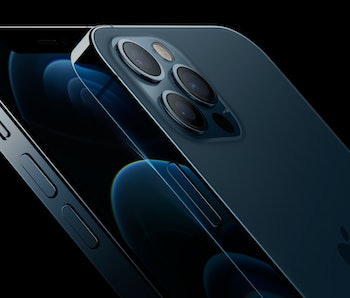 Yesterday’s iPhone 12 reveal included an absolute mountain of new feature announcements — so many that consumers and Apple stans alike struggled to keep up with which model came with which next-gen hardware. We now have confirmation that every new iPhone will include Apple’s innovative 5G mmWave antenna. Yes: even the iPhone 12 Mini will be able to access those high-speed data networks, contrary to previous speculation.

The mmWave antenna is actually visible from the outside of the iPhone. The Verge reports that the small notch seen on the right side of the new line of iPhones is actually a small window to allow super-speedy 5G waves to pass through the phone’s antenna system.

There is one small catch: the mmWave antenna will only be available on U.S. models of the iPhone 12. Further, it still isn't clear whether or not that extra bandwidth will really be beneficial to most consumers, anyway.

Apple’s all about that 5G — Apple spent a sizable chunk of its event yesterday talking to the iPhone 12 lineup’s capacity for connecting to 5G networks. CEO Tim Cook waxed poetic about the immense power of 5G and how the next-gen data networks would allow the iPhone 12 to achieve a “new level of performance for downloads and uploads.”

Apple even brought out Hans Vestberg, chief executive of Verizon, to highlight the peak speeds of the company’s 5G networks. He took to the stage with tight pants and high-flying promises about the new iPhone’s speed capabilities.

Let’s be honest here — Apple is marketing the new iPhones’ 5G capabilities to the nth degree. Consumers are, of course, very interested in the promise of ultra-fast downloads no matter where they are. The unfortunate truth about 5G, though, is that it’s just not able to live up to our ideas about it.

The United States’ 5G rollout has been slow and spotty. Despite promises of “nationwide” connectivity, 5G is certainly not available everywhere — in fact, it’s unavailable more often than not. Where it is available, it’s mostly low-band, which only allows for speeds slightly higher than 4G LTE.

And mmWave is notoriously inconsistent. The technology has trouble penetrating walls and can only really travel short distances, which means you’re only going to notice a speed boost if you happen to be standing directly under a 5G tower while streaming. Using mmWave networks also uses more battery life, too.

The iPhone 12 lineup is ready for 5G networks — but 5G isn’t quite ready for the iPhone. But hey, at least your phone will be ready once cell carriers figure out how to actually bring 5G to everyone.