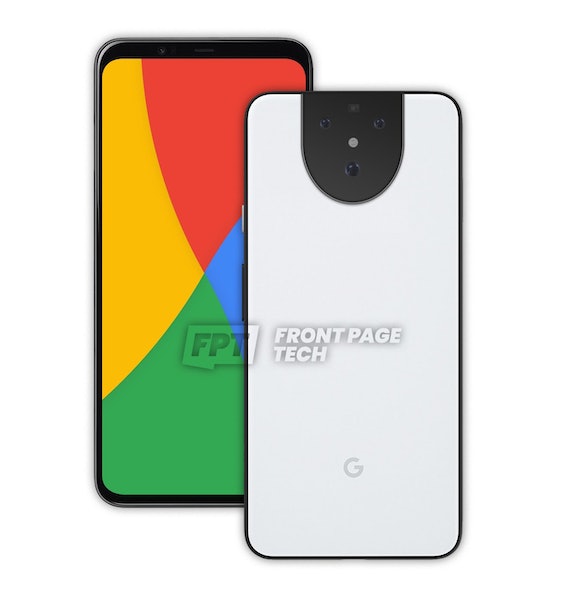 Surprise! Today we got a first look at Google’s Pixel 5… maybe. Jon Prosser from Front Page Tech tweeted a render of the front and rear of what he says is the Pixel 5. A closer look suggests the image could actually show the front of the 5 XL and the rear of the 5 (or vice versa), but whatever it shows, the real talking point is the rear camera setup that’s arranged three lenses in a triangle with what appears to be an LED flash in the center.

Yes, it looks like the surprised-face emoji — We’ve asked around, it’s not just our chronic pareidolia playing up. Everyone we’ve shown the picture to has the same response: 😮. What else can we glean from the render? Very little. There’s a thin bezel that runs down the edges of the phone, a slim chin, and a broader forehead that Prosser speculates contains the Soli Radar system — the movement-tracking hardware that first showed up on the Pixel 4.

We’re still waiting for the Pixel 4a — Previous rumors have suggested we’ll see a Pixel 4a before we see a Pixel 5, and that the mid-ranger will be unveiled at Google’s next I/O event in May and address the shortcomings of the Pixel 4. Could we see a Pixel 5 unveiled at the same time? It’s entirely possible, though we’d think Google would want to separate the two to avoid diluting enthusiasm for either. Either way, Verizon wants to make it clear it's still enthusiastic about the Pixel brand, no matter what you've heard.

Rumors Verizon won’t have it shouldn’t be believed — On Wednesday, Android Police ran (and then retracted) a story claiming Verizon planned to stop selling Pixel devices, but on Thursday Verizon disputed the report, saying it plans to keep selling Google’s smartphones and that it looks “forward to the new portfolio of devices.” So do we, Verizon, so do we.