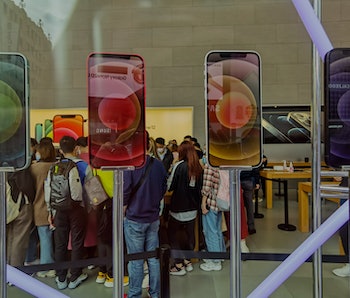 Insurance company Allstate decided to test the durability of Apple's new iPhone 12 and came away impressed, saying it's the most durable smartphone it's tested. But you still are going to want to put a protective case on your phone.

It's glass, folks — Both the iPhone 12 and 12 Pro still functioned properly following two drop tests each onto a sidewalk from six feet high, though they showed cracks on their screens from the very first test. The 12's were minimal, while the 12 Pro cracked pretty badly on the first drop:

Apple says that its new "Ceramic Shield" cover material is tougher than any smartphone glass, and provides for four times better drop performance than the screen on the iPhone 11. And indeed Allstate says it's a huge improvement. But look at what happens when the 12 Pro is dropped face-down from six feet:

It's great that the durability is improving over time, but don't be fooled into thinking that it's drop-proof. It's a similar situation with "waterproofing." The iPhone 12 has an IP68 rating, meaning it is resistant to water up to a depth of six meters for 30 minutes. That's better than prior iPhones but the phone still isn't completely waterproof. You're not going to want to take it scuba diving, or try taking lengthy calls while in the pool and beneath the surface (you wouldn't be able to hear the caller anyway). But it's still far more likely to survive a spill of coffee than it is spilling out of your pocket and hitting the sidewalk.

Get a case, and insurance — The iPhone 12 screen should hold up well against more realistic incidents. Because frankly you probably won't be dropping your phone from six feet high onto a rough sidewalk very often. Putting on a protective case is still a good idea either way, especially if you want to make sure you protect those raised cameras.

Of course, Allstate made this test video because it sells iPhone insurance that includes coverage for cracked screens. Apple also has AppleCare+, which includes fixes for two accidental damages each year. It costs $149 annually for the 12 mini and 12, or $199 for the Pro and Pro Max. Considering how pricey these phones get, insurance is probably worth it... especially if you're clumsy.