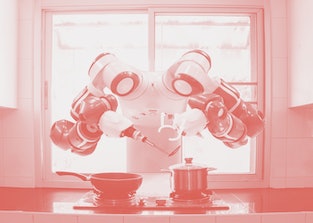 The number of employees Amazon has working on the secretive "Vesta" project.

More than 800 people are working on a top-secret home robot project at Amazon — and at least a handful of them are worried it will be a monumental failure for the company. The “Vesta” robot project is in late-prototyping stages, according to a new report from Insider, which reviewed internal documents about the project.

Little else is known about Project Vesta. We’ve heard rumors about the home robot before, but this week’s report is by far the closest we’ve come to tangible information about how it’s actually going for Amazon. The answer, it seems, is complicated. If it ever makes it to market, Vesta would be the most ambitious consumer product ever created by Amazon’s Lab126, the development and research center behind creations like the Kindle and Amazon’s Echo smart speaker.

There is concern amongst employees, though, that Vesta is doomed to fail. “People are very skeptical — we’re worried it could turn into another Fire Phone,” an insider told Insider. And, as anyone who watched the Fire Phone’s meteoric fall from grace will know well, that comparison is a doozy.

Lots of speculation — With the Vesta project still in top-secret mode, we have almost no information about the robot itself. Sources familiar with the project say the leading prototype of the device is about the size of “two small cats,” or about 10 to 13 inches wide.

Those sources said also that the robot will probably include multiple cameras, a screen, and a mic — like a “Fire Tablet mounted on wheels.” Other potential add-on features include: air quality and temperature sensors, a retractable pole with a camera, and a small compartment for holding objects.

The final designs are still very much up in the air, though, and sources told Insider the project could still be scrapped entirely if prototyping doesn’t go well.

Would anyone want this? — That’s the question Amazon employees are most concerned about. They say the project is currently a “top priority” at Lab126, where it’s been in development for about four years now. There’s reportedly been high turnover at Lab126 lately, spurred mainly by frequent launch delays.

Employees worry the Vesta robot will be too intense — and too expensive — for Amazon customers. Amazon might launch the robot as an invite-only product to start, and early sales projections are quite low. Maybe law enforcement will find a way to weaponize it, if nothing else. Lots of fun to consider here.

We would be totally fine if the Vesta never made it to consumer homes. It’s bad enough that Amazon released a flying Ring drone last year; a full-fledged Alexa robot is nothing short of a privacy nightmare. That concern could hold the product back even more so than price.