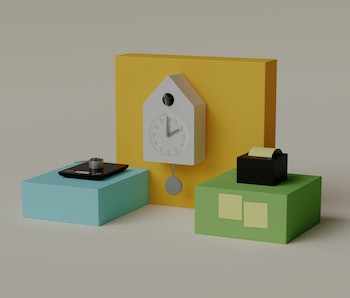 This morning Amazon announced a new program called “Build It,” in which the company will allow its massive customer base to vote on which products they’d like to become reality. It’s like Kickstarter but with less risk involved.

Beginning today, customers can back Amazon projects they’re interested in by pre-ordering the product. If it hits its pre-order goal within 30 days of being introduced, Amazon will build it, and those who backed the project will receive the product at that limited-time early price. If it doesn’t hit that goal, Amazon won’t build the product, and you won’t be charged for it, either.

Amazon is introducing three concept products to launch the Build It program: a smart sticky-note printer, a smart nutrition scale, and a smart cuckoo clock. They’re all available for pre-order from today through March 19, at which point they’ll disappear into the ether unless enough customers want to buy them.

Though some of these products feel gimmicky, it is refreshing to see Amazon paying attention to what its customers want for a change.

Let’s talk about these concepts — Amazon’s first round of concept products all center on connectivity with Alexa, the company’s virtual assistant.

One product, a Smart Sticky Note Printer, is a hands-free label printer that can be controlled using just your voice. You can ask Alexa to print out your shopping list or a set of to-do lists, for example. And by the magic of thermal technology, Amazon says it’ll never need an ink or toner refill. The pre-order price is $89.99; at the time of this writing about 5 percent of the product’s pre-order goal has been met.

Then there’s the Smart Nutrition Scale: a food scale with internet access. If you’ve ever wanted to know exactly how much fat you just weighed out to put into your body, you’re in luck. It’s available at $34.99 right now and about 2 percent of the goal has been met.

Lastly there’s a Smart Cuckoo Clock, which is, well, exactly what it sounds like. The clock works with Alexa and has 60 LEDs and a mechanical pop-out cuckoo bird. The pre-order price is $79.99 and thus far it’s reached about 3 percent of its goal.

Put your money where your mouth is — Amazon hasn’t disclosed how many pre-orders are needed to meet the goal for each product. In this first wave, the company says, at least one product will be built, and if all three receive enough pre-orders, they’ll all be made available.

It’s great that Amazon is turning to customers for input on which products they’re most interested in. The effort still feels very profit-driven, though, probably because Amazon has proven time and time again that it values profits above all else. That feeling isn’t helped by the fine print of each of these products: they must be paired to an Echo device in order to function. Purchasing one means you have no choice but to buy into the Alexa ecosystem.