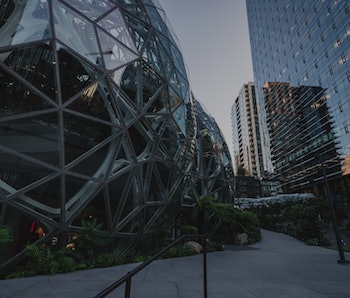 Updated 7/10/2020 5:00 PM ET: Amazon apparently walked back the decision to ban TikTok from personal phones after word got around, saying in a statement that the email was sent in error. It's unclear what series of events must have occurred to accidentally write and send a company-wide emailing banning a popular app from personal phones. It seems more likely that Amazon is responding to public pushback over the move that some said was excessive.

The hits keep on coming for TikTok. It's being reported today that "due to security risks," Amazon employees are ordered to delete the app from their phones or lose mobile access to their Amazon email accounts. In a note to employees, the company says they must delete the app by July 10th which is... today.

Amazon requires employees to install a configuration profile on their devices in order to access internal email and apps, so the company can theoretically see whether or not employees are in compliance. It may seem weird that a company is ordering its employees to delete a social media app from their personal devices, but Amazon is really just controlling access to its email system, not access to the phone itself.

TikTok is being dragged down by its owner — TikTok is already facing turmoil across the world after its app was banned in India last week, and the U.S. is considering a similar move. The company has been desperately trying to distance itself from its Chinese owner ByteDance, which some fear could be ordered to hand over data or censor content at the request of local authorities. There's no hard evidence that TikTok has ever done anything wrong except for some suspicious instances that have been interpreted as censorship. The company has long denied it ever censors content at the request of Chinese officials.

The U.S. government is already investigating TikTok to decide whether or not ByteDance should be forced to sell the app. TikTok was born out of ByteDance's acquisition of U.S.-based Musically, and authorities have the power to undo such purchases if they're deemed a risk to national security. TikTok is practically the only Chinese-owned social network to find popularity outside that country.

A principled stance or money grab? — It's unclear exactly what Amazon is worried about, though it wouldn't be surprising if the move is related to its attempt to win a $10 billion cloud-computing contract with the Department of Defense. The U.S. Army last year banned soldiers from using TikTok, and the TSA has asked its workers to stop using TikTok to promote the agency. Adding to the concerns, a user on Reddit recently discovered that TikTok collects a huge swath of information from users ranging from their network information to what other apps are installed on their phones.

Amazon may want to demonstrate to officials that it's not going to risk sensitive information getting out, especially at a time when officials are feeling particularly hawkish on China. The company noted that employees can still access TikTok from their laptop browsers, however.