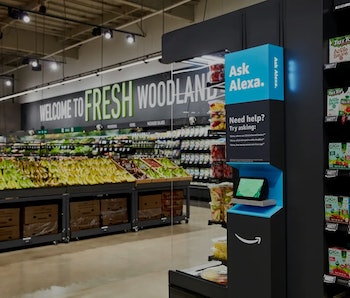 Amazon just opened the first of its Amazon Fresh-branded grocery stores in Woodland Hills, California. The Amazon Fresh store features Whole Foods-brand products as well as national brands that you wouldn't expect to see in Whole Foods, like Coca-Cola and Kraft macaroni & cheese. It's basically like a mix between Whole Foods and Kroger, with some smart technology thrown in.

The store is open to select customers for now but will be open to the general public sometime soon.

Grocery store of the future — The Amazon Fresh stores take advantage of Amazon's cashierless concept that started in its Go convenience stores, and in this incarnation the company is introducing smart shopping carts, called Dash carts, that allow customers to bypass the checkout lane. The carts feature a barcode scanner and a touchscreen displaying an itemized list of everything placed in the cart. By signing into your Amazon account, your default payment method will be charged when you walk out of the store.

There are also Alexa voice assistants placed throughout the store where customers can ask Alexa any questions they may have.

Crucially, Amazon says that Prime members will get free same-day delivery and pickup from the stores. Amazon is hungry to capture some of the grocery market but faces intense competition from Walmart and other retail giants who are able to offer speedy delivery of perishable goods thanks to their large footprints of existing stores. Walmart and Target have seen massive growth in customers placing orders pickup online during the ongoing coronavirus pandemic. Physical stores are also a convenient way for customers to return items.

It seems that Amazon wants to maintain Whole Foods as a separate, more high-end chain while using the Amazon-branded stores to reach the Kroger demographic. It's possible that someday the company will incorporate cashierless technology into Whole Foods stores if customers respond well.

Playing on defense for once — Becoming a bigger player in grocery could help cement Amazon as a place people return to for all their needs. Walmart has been rumored to be developing its own subscription service competitive to Prime that would offer same or next-day delivery from stores for an annual fee. Such a program could steal away business from Amazon if people start going to Walmart for all their needs instead. Why not also get the iPad from Walmart if you're already paying them for grocery delivery?

Amazon likely hopes that despite its tiny retail footprint, all the futuristic technology it's incorporating will make consumers curious enough to check it out.