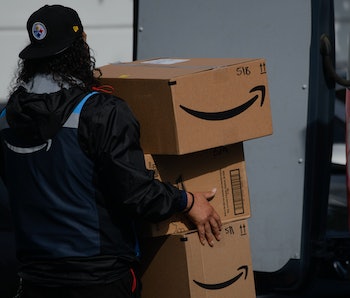 Amazon has begun installing AI-powered cameras in its fleet of delivery vehicles that will constantly surveil drivers on their routes. The news was first reported by The Information.

Anxiety inducing — Supplied by a company called Netradyne, the "Driveri" camera and software can detect and warn drivers about poor driving practices. The product will also collect data — which Amazon could later use to reprimand a driver for unloading boxes too slowly, or taking a route that was 0.2 percent inefficient. Four cameras will be installed in a vehicle and constantly record footage of the cab and driver.

Exact numbers vary because drivers of Amazon-branded vans are typically employed by outsourcing firms, but salary data from Indeed indicates many drivers net less than $40,000 per year.

“We are investing in safety across our operations and recently started rolling out industry leading camera-based safety technology across our delivery fleet,” Amazon spokesperson Deborah Bass told CNBC in a statement. “This technology will provide drivers real-time alerts to help them stay safe when they are on the road.”

According to an official video from Amazon, the system does not allow drivers to be monitored in real time, but it will upload footage to a safety team whenever one of any 16 infractions is detected. Road behavior like speeding or failure to stop will trigger audio alerts in the cab, like "distracted driving" or "no stop detected." Certain actions like hard breaking or seatbelt violations will trigger an upload to the cloud with no alert provided.

Maximizing efficiency — Amazon isn't the only such company to monitor drivers like this. UPS trucks are loaded with sensors that record a driver's every move, with data sent back to the company at the end of each day.

The argument in favor of such a system is that logistics are a huge cost for UPS and Amazon, and shaving off even a few seconds from an inefficient route, or reducing wear and tear on vehicles, can result in savings of tens of millions of dollars. UPS says that has also allowed it to increase employee salaries.

But as Amazon has introduced more technology in its logistics network meant to improve productivity, most of those gains in profitability have not gone to workers — though salaries now start at $15 per hour, above the federal minimum wage. And the company's expectations for its human workers who remain have increased; either keep up with the robots or get replaced. Amazon warehouses report an injury rate higher than the industry average.

Constant monitoring could understandably cause lots of stress for Amazon workers, who are already under a lot of stress to deliver hundreds of packages daily under tight schedules — and for salaries that aren't very good. One driver told The Information that they expect the cameras will make the job more difficult as they'll have to be concerned with "any possible mistake that an AI might think it saw." Nobody wants their boss constantly looking over their shoulder for even the slightest misuse of time, but that's effectively what Amazon's new tech will do.

Drivers for UPS at least benefit from unionization protections; several years ago they negotiated a contract which states the company cannot discipline drivers solely based on data. Amazon drivers and warehouse workers aren't unionized, though they are trying. The company was recently caught stealing tips from its Flex drivers, gig workers who use their own vehicles to deliver packages for $18-25 per hour (but pay their own expenses). Amazon was forced to settle the case for $61.7 million. The new cameras won't be installed in those vehicles.