Amazon's Astro is bad at basically everything, developers say

“As for my personal opinion of the device, it’s a disaster that’s not ready for release.”

One developer's comments about Astro, according to leaked documents. 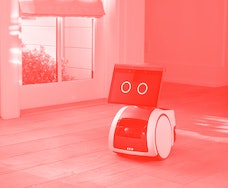 Amongst announcements for every Alexa-connected product you could ever need (and then some), Amazon dropped a bomb yesterday: The company’s first robot would soon be making its way to Prime fans’ homes. Called Astro, the robotic assistant is essentially an Alexa tablet on wheels. Amazon made sure, in its announcement of Astro, to speak to the wealth of time and resources put into making the product fully autonomous.

Astro is supposed to follow you around, ready with a friendly wink whenever you need it. Apparently it’s not even very good at fulfilling that basic function. Well, actually, “terrible” is the word some people who worked on the project used to describe the cute little assistant. Documents leaked to Vice reveal that at least a handful of Astro’s developers don’t think it’s fit for consumer homes yet.

Stairs, in particular, are described by these sources as being problematic for the robot. “Astro is terrible and will almost certainly throw itself down a flight of stairs if presented the opportunity,” said one source who worked on the project. Not exactly the vote of confidence you want to hear about a $999 device.

Bad at just about everything — These leaked memos do not inspire confidence in Astro’s ability to do…anything. Navigation seems to be only the very beginning of Astro’s problems. “As for my personal opinion of the device,” another source wrote, “it’s a disaster that’s not ready for release.”

The sources describe Astro’s hardware as being quite fragile. Developers noted that Astro is prone to breaking itself, especially its telescoping mast, which has broken on several devices, locking in either the extended or retracted position. “Fragile” isn’t a word we like to hear describing a device that spends all its time near our feet.

The documents also speak to Astro’s person-recognition software, which is meant to personalize the robot’s behavior and detect whether or not a stranger has entered the home. The aforementioned developers say the robot’s person detection is “unreliable at best.”

And a privacy nightmare — If Astro’s willingness to “commit suicide on a flight of stairs” weren’t enough to scare us off from the robot, these devs have also described Astro as a “privacy nightmare.” One worker went as far as to say Astro is “an indictment of our society and how we trade privacy for convenience.”

To which we say: Of course Astro is a privacy nightmare. This little robot is meant to follow you around everywhere, learn about the inner workings of your behavior, and report back to Amazon on its findings. This is Amazon we’re talking about, after all.

Amazon’s official stance on these leaked documents is that the comments are “simply inaccurate.” Here’s the rest of the company’s statement on the matter:

Astro went through rigorous testing on both quality and safety, including tens of thousands of hours of testing with beta participants. This includes comprehensive testing on Astro’s advanced safety system, which is designed to avoid objects, detect stairs, and stop the device where and when necessary.

Amazon is pushing Astro as an accessibility device and a home security device. Instead it seems the target audience might be folks who enjoy watching robots throw themselves down flights of stairs. There’s surely a crowd ready to pay $999 for that experience, right?