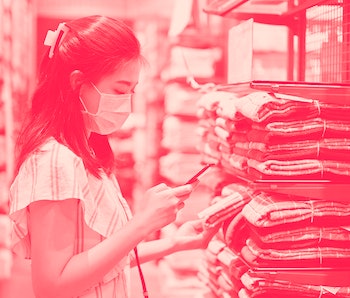 Barring some all-encompassing apocalypse, Amazon is just going to keep expanding until there’s nothing left for it to eat. The online retailer’s most-hit victims have been brick-and-mortar retail stores, because, well, traditional establishments have a lot of trouble competing with unlimited two-day delivery and endless stock. This we know.

Now that Amazon’s wiped huge numbers of retail establishments off the map, the company is getting ready to open up its own IRL department stores. They’re a venture Amazon has been working on for quite some time now, according to a report from The Wall Street Journal that outlines what, exactly, shoppers might expect when walking into an Amazon department store.

Amazon won’t confirm or deny the report, with a spokesperson saying only that, “As a matter of company policy, we do not comment on rumors or speculation.”

The long and the short of Amazon’s plans appear to revolve around creating a shopping experience reminiscent of the rest of Amazon’s empire. That means there will be plenty of technology and lots of Amazon-branded clothing. And they could open as soon as next year. How exciting.

As far as in-store technology goes, Amazon is trying out a myriad of options. One solution proposes that customers will scan QR codes of items they’d like with an app, which workers can then use to find the right size and prepare a fitting room. The fitting room itself might include a touchscreen for customers to ask for more clothing.

More… Amazon stores? — Department store shopping is already a pretty impersonal experience. Amazon’s take on it removes any remaining vestiges of humanity by replacing worker-shopper interactions with scanners and screens. The idea is efficient, sure, but doesn’t exactly sound like fun. If we wanted to shop via touchscreen we’d sit on the couch with an iPad.

Shopping experience aside, Amazon’s goal of opening up department stores just feels unsavory. Amazon’s impossible-to-beat deals have been pushing business out of traditional retail stores for years now, and the COVID-19 pandemic has only accelerated the pace of those closings. Now that all those pesky stores have closed for good, Amazon is getting ready to expand its IRL offerings.

And anyway, as The Wall Street Journal points out, Amazon’s department store innovations aren’t even that innovative. Companies like Nike have been preparing fitting rooms ahead of time with scanned orders for years now.