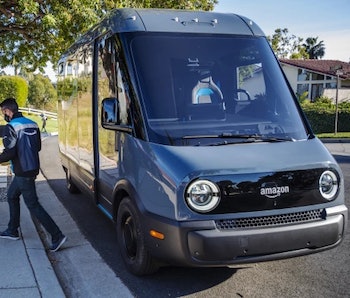 Amazon is finally testing electric delivery vans from Rivian Automotive (h/t CNBC). The company has backed Rivian for years, announcing the purchase of 100,000 vans in late 2019. Amazon’s support is part of its push to achieve net-zero carbon emissions by 2040. Los Angeles will be the first city to get a fleet of Rivian vans.

The e-commerce giant has made some moves to be eco-conscious, like adding sustainability labels to products, along with CEO Jeff Bezos’ personal $10 billion pledge to combat climate change. But a lot of it has felt like lip service. Shifting its fleet away from gas-guzzlers could have a genuinely significant effect on its overall emissions, though.

Good news for L.A. — The City of Angels is the perfect place to test them out. L.A. is notorious for its often dense, traffic-induced smog that clouds scenic vistas and lungs. Amazon has seen tremendous growth during the pandemic, but delivering all those packages quickly is definitely taking a toll on the environment.

As the year goes on, the company is expected to roll out the vans in up to 16 cities. This testing phase is an expansion of a general electrification push, including the construction of thousands of electric vehicle charging stations.

The horizon is looking electric — Rivian isn’t just focused on delivery vans, its initial claim to fame is that it's planning to release an all-electric, all-terrain pickup truck. The company recently closed a $2.65 billion funding round, bringing its total fundraising efforts to about $8 billion.

Given Bezos and Elon Musk’s billionaire rivalry, Amazon’s initial investment in Rivian certainly feels a little personal. While it’s a sound business decision, it came during leadership from a man whose great idea for combatting climate change was to create space dumps.

In addition to the pickup truck, Rivian is expected to finalize its delivery vans and commence production at the end of the year.