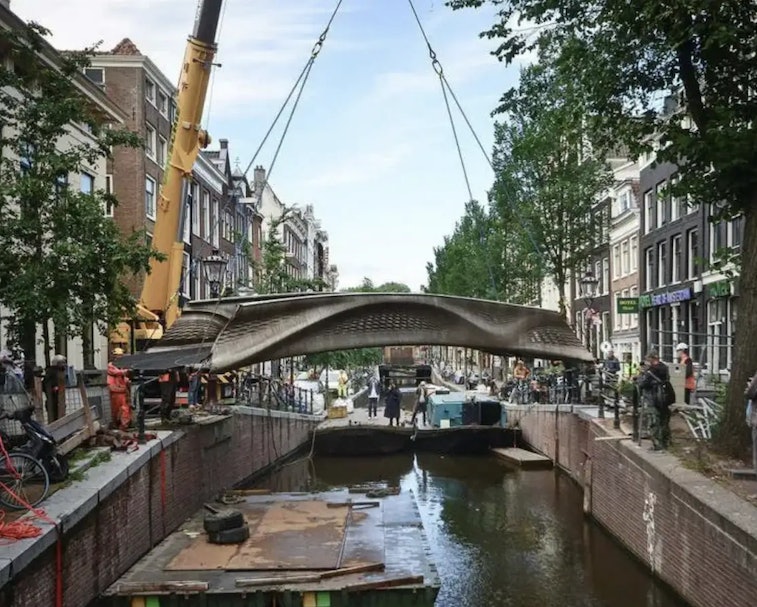 Imperial College London just made history by erecting the first-ever bridge constructed entirely via 3D printing, Business Insider reports. The steel bridge, which opened in Amsterdam’s Red Light District last week, is 12 meters long and weighs nearly 5 tons — no small feat of engineering and patience. It opened this month to foot traffic over the Oudezijds Achterburgwal canal after being unveiled by the Netherlands’ Queen Máxima on July 15.

Creating it took four industrial robots approximately half a year straight. The robots even handled welding torches to deposit the printed layers of the bridge atop one another. That’s a sentence we never thought we’d write, but this is 2021, after all.

It’s impressive enough that the bridge exists and is capable of actually being used by people — that’s a milestone for 3D printing and a testament to how far the technology has come. More incredible still is that researchers have set the bridge up with specialized sensors that will key them into any structural issues or other weak points over time. It’s a living engineering experiment, and one that’s likely to improve 3D printing’s uses across many industries.

Sensor central — The bridge was created from a highly detailed 3D model, which has the added benefit of being available for data analysis in the long run. More than a dozen sensors have been installed beneath the bridge to monitor strain, vibration, and temperature at various parts of the steel structure. All this data can then be transferred to the digital model for analysis by the engineering team.

Given that this is the first time a 3D-printed structure of this size has actually been deployed for human use, this living model will be indispensable to understanding how the material stands up to the conditions of everyday life. If a particular sector isn’t weathering well, for example, engineers can efficiently know where and when repairs are needed.

So far so good — Engineers say Amsterdam’s many walkers have nothing to fear about the 3D-printed bridge’s overall integrity, though; it’s already faced significant testing, and all early signs point to it being very tough indeed.

“What was in some sense surprising was that the baseline strength was what you would expect of just rolled steel,” said the University of Cambridge’s Mark Girolami, who worked on the bridge model. He added that, in some cases, the 3D-printed steel actually turned out to be stronger than traditional steel.

The success of the bridge could have implications for every corner of the construction industry; 3D printing offers enormous space for innovation in types of materials that can be used for a project and just generally lets engineers play around with structure in exciting ways. And as a bonus, Amsterdam citizens and tourists now get to walk over a bridge constructed entirely by robots.