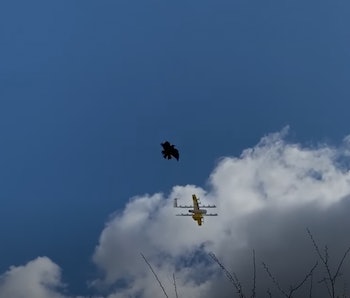 Of course it was Australia. A video uploaded to YouTube several days ago shows an Australian raven attacking a Wing drone. A subsidiary of Google, Wing has been delivering a selection of goods to residents of Australia’s capital city Canberra since 2019.

Wing’s drones — which also operate in some parts of the U.S. and Finland — can carry small packages. After a human operator hooks a package onto a line, the drone flies to the customer’s location and the cable lowers the package down to the ground before the drone returns to its base station. Because the drones need a drop-off point, they’re currently best for use in suburban areas where people have yards free of obstacles.

Bird meets prey — Wing drones are supposed to use software to inform air traffic controllers of their location, so as not to collide with other aircraft. But a 41-second video shows that birds are a more unpredictable obstacle. As the Wing drone captured is trying to land, a black raven repeatedly flies up to it, as if attacking it. The drone doesn’t appear to take any issue with the raven, however, and eventually flies off into the distance.

Google is among several companies that have tried to commercialize drones for transportation of goods, like food and medicine, under the premise that the skies offer a safe place to transport items using autonomous systems because there are far fewer obstacles to avoid in the skies than on land.

Amazon has also invested heavily in the space but has struggled to commercialize its drone operations. Recent reports have suggested that Amazon’s drone delivery program is on life-support after laying off 100 workers in the U.K. A major problem with drones is that they simply cannot carry much besides small items, and they need safe places to land.

Great for medicine — One area where drone transport is more promising is in delivering important medical items to hard-to-reach locations. A startup called Zipline does this in Rwanda and Ghana, and says it has made over 400,000 deliveries since its founding in 2014. During the COVID-19 pandemic it partnered with Walmart to deliver health and wellness goods near its Arkansas headquarters.