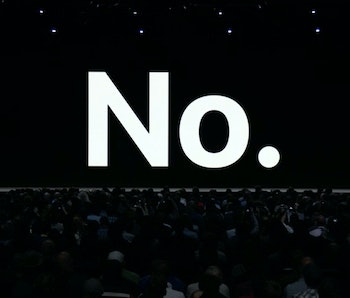 Every day feels like Clearview AI looked at gaffes from the 2010s like Fyre Fest and Theranos, and it thought “we would like to have to worst press of the 2020s.” But instead of being a scam, it’s raised the ante by functioning as intended to fuel dystopic law enforcement policies.

Capping off an explosive week featuring a data breach and an employee exposing retailers like Macy’s and Best Buy as clients, Clearview AI was blocked from Apple’s App Store. TechCrunch reports the startup used Apple’s enterprise install function to allow the app the run outside the App Store. The enterprise function is meant for internal organization apps, but Clearview used the loophole to grant access to clients.

The tables have turned — For a company that scraped billions of photos, Clearview’s barrage of scrutiny this week alone holds a certain level of irony. TechCrunch found the company’s iPhone app in an Amazon S3 storage bucket on Thursday, similar to the APK found by Gizmodo for the Android version.

The iPhone app clearly operated as an enterprise app, but was labeled as “beta.” The Android version had potential or active features like hyper-active GPS and a driver’s license barcode scanner (the latter of which CEO Hoan Ton-That denied).

Both apps required Clearview accounts to actually use the software and Gizmodo wasn’t able to take screenshots. So, it’s kind of secure? And, you know, hackable.