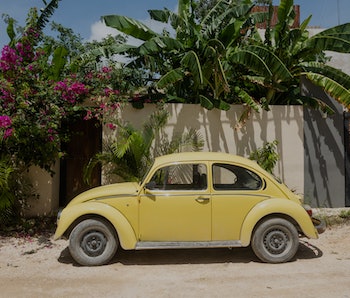 Building mixed reality headsets isn’t the only new project Apple’s been working on in very public “secret.” The company’s all-but-confirmed Project Titan automotive project continues to trudge along, and according to a new report from The Information, remains a mess, with the car’s interior design the only somewhat stable element in a storm of leadership and direction changes.

Beetle — While famed Apple design guru Jony Ive is not currently employed by the company, he was the head of industrial design when Project Titan started and had a hand in positioning autonomous driving as the key feature of Apple’s future car, going so far as to ditch the steering wheel entirely. “Ive believed that autonomy was to the car what multitouch gestures (using fingers to tap, scroll and zoom) were to the iPhone,” The Information writes.

Now as a design consultant through his firm LoveFrom, Ive is reportedly still guiding the overall look of the car project. Currently the “Apple Car” has passenger seats that face each other and “a curved ceiling similar to the roof of a Volkswagen Beetle.”

Apple’s team has also explored a trunk that automatically raises and lowers for easier access, and offers passengers the ability to lay down and nap mid-ride. And those are seemingly reasonable ideas, according to The Information; an early concept from Apple’s industrial designers involved building the car entirely from glass.

Leadership turmoil — More than settling on what Project Titan should look like, the project has featured frequent turnover because of a lack of commitment from Apple higher-ups, at least as The Information tells it. And that would make sense, the only really hard news that suggests Apple is working on a car is the revolving door of car executives who’ve been hired and later left the company.

Doug Field, who left Apple for Ford late last year, tried to get the company to commit to actually making a car but struggled with both Apple executives, and the unfinished nature of the self-driving software that was supposed to power the car. Ian Goodfellow, the director of machine learning at Apple whose designs reportedly served as the core of Project Titan’s autonomous capabilities, left for Google earlier this year over Apple’s return-to-work policy.

With all of the false starts, the project seems to have existed as a quietly burbly disaster for the last several years. Apple has reportedly now placed Titan in Kevin Lynch’s hands, the company’s vice president of technology who spearheaded the launch of the Apple Watch. Apple has even pulled off some successful demos of its self-driving tech — and one notable failure involving an almost-accident with a jogger. What’s clear is that much like AR and VR hardware, building a car, especially one that drives itself, isn’t an easy problem. Apple has the time and money to throw at it, but until the company actually divulges the details of what it’s been working on, all we really have is some distracting concept art for CarPlay to go on.