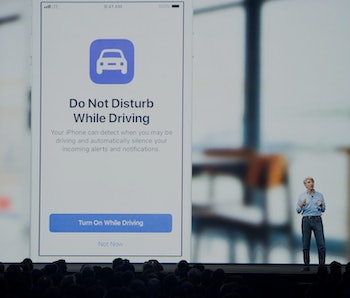 An independent study has found that using Apple CarPlay and Android Auto impairs drivers more than alcohol and cannabis. Of the two infotainment systems, Apple's is even more distracting than Android's, according to findings from the U.K. charity IAM RoadSmart.

The study, which was conducted by TRL on behalf of IAM RoadSmart, put drivers through a series of simulated test routes. Twenty Android and twenty Apple users each drove a control route without interacting with their respective systems, plus a route while only using the voice system and a route while only using the touch screen. Using the voice systems alone was found to be more distracting than alcohol and weed, with reaction time delayed even further by using the touch screens.

The findings — Reaction times were measured by asking drivers to flash their headlights when a red bar appeared on screen. Apple CarPlay users performed 57 percent worse while using the touch screen and still 36 percent worse while just using voice features. Both are worse than texting, which saw a 35 percent delayed reaction.

Android Auto fared better than Apple but was still a significant impairment nonetheless. Reaction times were slowed 53 percent for the touch screen and 30 percent for voice. Driving at the legal limit for alcohol saw a 12 percent delay, while cannabis was at 21 percent.

What do they want? — To go along with their findings, IAM RoadSmart is asking the automotive industry and government to test and approve all infotainment systems while creating clear standards to minimize distractions. The National Highway Traffic Safety Administration already has a guideline advising drivers not to take their eyes off the road for more than a sum of 12 seconds when completing a task — a threshold using the touch screen fails to meet.