Apple has over a thousand engineers developing its AR / VR headset 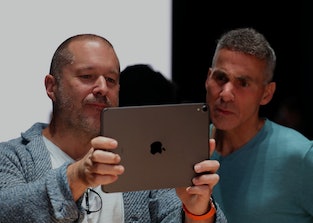 How many people Apple has allegedly got working on related projects.

Apple is reported to have "well over a thousand engineers" working on its mixed-reality headset. That's according to Bloomberg, which has said the first headset will cost $3,000 and focus on virtual reality (VR), with limited augmented reality (AR) applications.

Unlike VR, which completely immerses a person in a 3D digital environment, AR overlays information over a view of the real world, keeping one firmly grounded in the environment around them — think the defunct Google Glass, which could display navigation directions on a translucent screen next to the wearer's eye.

Apple CEO Tim Cook has said he believes AR could be the next iPhone-like platform because it has the potential to "amplify the human connection," something he thinks VR doesn't do.

A tough sell — But Google Glass was a flop and right now, AR is largely used for enterprise applications, like seeing how CAD models look in a real environment. Apple itself offers its ARkit framework for developing AR applications on the iPhone and iPad, but it hasn't found a groundbreaking use case yet.

The new report indicates that Apple has hit roadblocks developing the AR side of its headset, but that the company has moved its hardware chief Dan Riccio to the team developing the product. There's a hope that his expertise will help move development along. The headset is rumored to feature a dozen cameras, LiDAR sensors for hand-tracking, and two 8K-resolution displays (one per eye) with eye-tracking and support for spatial audio. Think Facebook's Oculus Quest 2, but far more premium.

Niche appeal — At a $3,000 price, enterprises may be willing to buy a headset with limited AR applications, but it will be a tough sell for most consumers unless the headset provides an experience that's truly groundbreaking. Insiders at Apple have suggested they expect it will sell in low volumes — so low, in fact, there may only be one headset offered per retail store per day.

If Apple's end goal is to develop a true AR / VR experience for the masses — which Cook's comments suggest it wants to — a $3,000 headset wouldn't be it. But the first headset may provide the testing ground for developers to create content and experiences for cheaper devices down the road — maybe there'll be an xCode-type app for the headset. Apple doesn't really cater to niche pro businesses, and in that sense, it seems hard to believe it wouldn't have bigger plans beyond a really expensive headset for looking at CAD designs.

But then again, Apple did just release a pair of $550 headphones — it wouldn't be totally inconceivable of the company to release a $3,000 premium VR headset for watching movies.