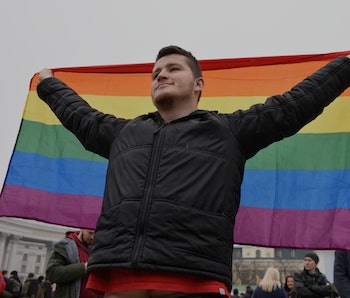 More than 40 of the United States’ top employers, many of whom are big tech companies, have co-signed an open letter opposing legislation that targets and discriminates against LGBTQ people, the Human Rights Campaign reports. The letter is a product of the Freedom for All Americans campaign, which seeks protections for LGBTQ people across the U.S. Among the companies that signed the letter are Google, Microsoft, AT&T, Amazon, IBM, PayPal, Uber, Lyft, Salesforce, and Dropbox.

Acknowledging values and economic drivers — The Human Rights Campaign notes that, by signing the open letter, these companies are publicly acknowledging the way anti-LGBTQ bills would affect their employees.

“Harmful legislation such as the torrent of anti-LGBTQ bills introduced across the country deeply affect businesses’ ability to recruit and provide opportunities to their customers and employees,” said Alphonso David, President of the HRC. “I applaud the signatories of this letter for their dedication to empowering LGBTQ people across the country.”

Apple has led the way in advocating for inclusion — Of the co-signing tech companies, Apple has consistently been the most vocal about pushing for inclusion both in and out of the workplace. The company signed a letter in 2015 urging the Supreme Court to rule in favor of gay marriage, and just last year Apple co-signed a similar letter about LGBTQ workers’ rights.

With dozens of bills currently open to oppose fair hiring processes for queer people across the country, any and all backup is appreciated. Getting some of the largest, most valuable, and most influential companies offering the backup can only help.