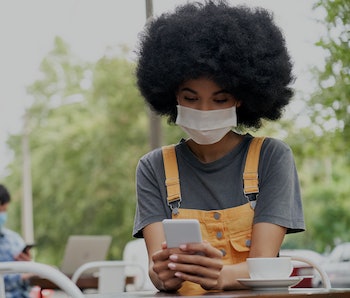 Apple is still trying to find solutions for the challenges face masks present to its Face ID system. As one of the company’s most impressive new features in recent years, Face ID is getting dealt a blow by the pandemic, and iPhone users can't fall back on using a fingerprint, because recent iPhones don't include the necessary sensor. Masks understandably impede the phone’s ability to authenticate a user’s face, so Apple's solution is a riff on two-factor authentication that uses an Apple Watch, Pocket-lint reports.

How to get into your phone — This isn’t the first time Apple has used its smartwatches as security keys. Mac users have been able to use their Apple Watches to unlock their computers for a few years, with varying degrees of success.

This new iOS feature works very similarly — the watch gives you a little haptic feedback when you pick up your phone so you know it’s unlocked. The watch itself needs to be unlocked and the feature will need to be activated in its settings. The feature works on the basis of proximity to keep your information as secure as possible and will require a passcode every few hours while turned on.

You’ll only be able to unlock the phone or use Apple Pay with this tool so that you don’t have to take your mask off when you’re running errands. iTunes and App Store purchases, however, will need a different authentication method. Apple originally responded to mask-wearing with an iOS 13.5 update that automatically brings up a passcode form when users try to use Face ID.

A feature that was once designed to be seamless might as well be turned off these days if you’re going to need a passcode at some point in the process. As a result, Touch ID will likely receive much more attention in the future. The biometric security feature may be coming to the Apple Watch’s digital crown, and it’s rumored that an in-display fingerprint reader might be part of the iPhone 13.

An update for the ages — When iOS 14 launched, it was a breath of fresh Androi—air for iPhone users thanks to homescreen widgets and other refinements. This latest iteration is ushering in a few other meaningful changes, including support for PS5 and Xbox Series X controllers.

Most notably, iOS 14.5 features app tracking transparency measures that have Facebook frothing at the mouth. The tool will also allow users to choose not to be tracked at all, potentially leading to more nefarious advertising tracking tactics. All of which suggests Apple will have user identification on its mind for the foreseeable future.

More like this
Jackson Chen
15 hours ago
Tech
Everything we know about the AirPods Pro 2
Matt Wille
6.22.2022 10:18 PM
Spam No More?
Apple is finally testing more robust SMS spam filters for iOS
Will Gendron
6.23.2022 4:00 PM
Tech
DARPA pokes yet another hole in blockchain’s ‘decentralization’ claim