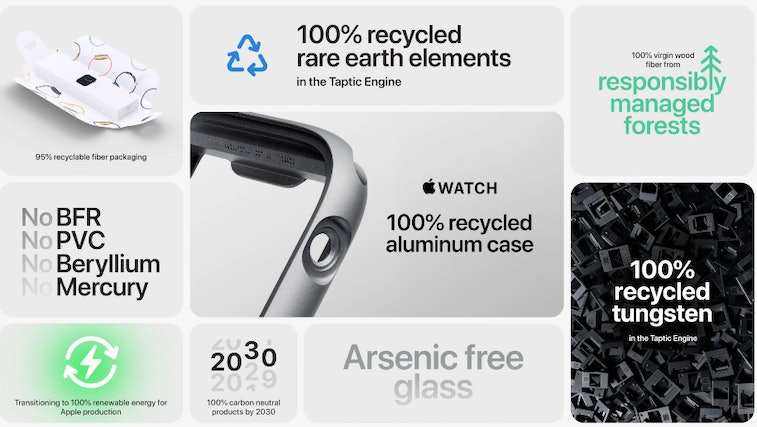 During today's Apple Event, the company dedicated a short segment to updates about its sustainability efforts. One of those efforts: killing off the included USB adapter with the Apple Watch.

Lisa Jackson, Apple's VP of Environment, Policy, and Social Initiatives, spent most of the session listing the company's sustainability accomplishments. All of Apple's operations — including in its supply chains — will be carbon neutral by 2030, the company reminds us. Already its offices and data centers are running on renewable energy.

In the effort to continue improving its sustainability efforts, Apple says it's nixing the USB adapter included with the new Apple Watch. But is that measure really meant to prioritize going green? Or, as our cynical side would have us wonder — is it to pad Apple's pockets?

50,000 cars — Jackson says the new Apple Watch won't come packed with a USB adapter because it will severely cut down carbon emissions. So much so, in fact, that cutting the charging adapter will eliminate the equivalent of 50,000 cars per year.

Money, money, money — Here's the thing about this announcement: it's not eliminating the carbon created by manufacturing USB adapters. Those adapters are still going to exist, and Watch owners will still want them to charge their devices.

What Apple is doing is simply taking away the free adapter that's always come included in the box. If you're buying an Apple Watch for the first time, you'll still need to grab a charger to go with it — it'll just cost extra. Apple isn't reducing its carbon footprint through this endeavor so much as it's just... charging customers a premium for the same products.

Apple's goal to be entirely carbon-neutral by 2030 is promising. Not Google-level promising, but much better than nothing at all. But removing the charger isn't helping anyone. In fact, it's making the company's devices less accessible than ever for consumers. Could this — forcing customers to pay extra for necessary accessories under the name of sustainability — be the new normal for Apple?