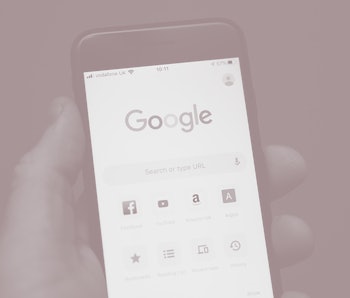 Apple is devoting increasing resources to the creation of its own search engine to rival the likes of Google, according to a report from the Financial Times. The timing is impeccable, given that Google was just hit with a massive antitrust lawsuit alleging its search engine and advertising empires constitute an illegal monopoly.

If Apple’s search engine efforts produce serious results, it could send shockwaves through long-time partnerships between the phone-maker and Google. Right now Google pays Apple billions of dollars each year to set its search engine as the default on all Apple devices.

FT reports that Apple’s efforts, while quiet for the most part, have not flown completely under the radar. Apple has posted multiple job openings including the stipulation that candidates would help “define and implement the architecture of Apple’s groundbreaking search technology,” for example.

Just months ago, the idea of creating a search engine from scratch would have seemed fruitless and, to be frank, a bit silly. But Apple, always game for a long-term chess match, is thinking a few steps ahead here.

Are we sure this is happening? — Not at all; from the public’s view, at least, Apple’s effort to create a search engine doesn’t exist. The company declined to comment when FT inquired upon the topic. Apple has never been one to telegraph its next moves, though, at least not until they’re guaranteed.

Apple is also one of the few tech companies that could actually pull this off. Search engines aren’t exactly easy to create, and they’re even more difficult to sustain in the face of immense competition like that from Google. Apple has tons of web traffic to analyze from its devices to use toward a search engine; it has those same devices to implement the search engine once it’s ready. And the company has plenty of cash to throw at the initiative.

But there is some evidence — iOS 14 has made some minor changes to the iPhone’s search functions, for example. Searches started from the Today View or by swiping down on the home screen no longer use Google’s search results; instead they use Apple’s own suggestions.

Search marketing experts also told FT that Apple’s web crawler, Applebot, has been showing its face way more than usual. Digital marketing consultant Suganthan Mohanadasan said Applebot has been present on his clients’ websites “a ridiculous number of times” in recent weeks. Apple’s definitely trying to gather information from disparate parts of the web — it’s just not entirely clear to what end.

Bringing it all home — Above all else, Apple loves Apple. Apple will do anything in its power to keep every part of its business in-house — hence game-changing moves like beginning the switch to its own silicon chips this year.

There’s never been a better time for Apple to work on its own search engine. The DOJ’s antitrust suit could, within a few years, force Google to finally give up some of its search engine supremacy (even if the company thinks that will never happen). This would leave prime real estate free for Apple to swoop in with an alternative.