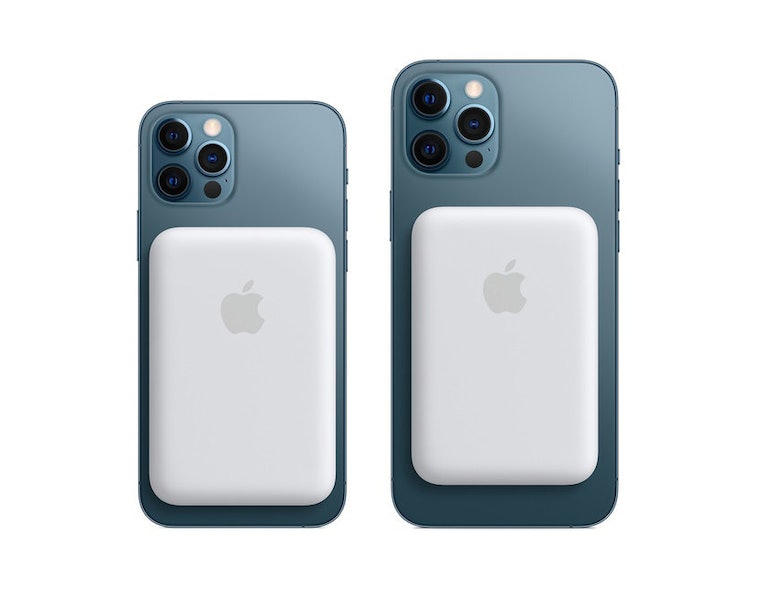 Apple today released the MagSafe Battery Pack, a wireless battery that attaches magnetically to the back of an iPhone 12 to provide additional hours of use. It was first reported back in February that Apple was developing one.

In typical Apple fashion, the battery isn’t exactly cheap — it retails for $99. That’s more than you’re going to pay for a larger external battery from a third-party manufacturer like Anker. But Apple’s battery is sleek and convenient since it attaches to the back of the iPhone and doesn’t require a Lightning cable.

The new accessory has passthrough charging, so you can plug a Lightning cable into the accessory and it will charge your iPhone simultaneously.

The MagSafe Battery Pack will provide most iPhone 12 models with a full additional charge, as the total capacity is 3,000 mAh. The iPhone 12 Pro Max has a 3,687 mAh battery inside, while the standard 12 and 12 Pro have 2,815 mAh batteries.

Set and forget — One downside to the MagSafe Battery Pack is that it charges the iPhone slowly, at just 5-watts. But it’s likely that Apple sees the battery pack as something you’ll leave on your iPhone all the time and not think about, providing a constant but slow recharge, rather than plugging it in when you need a quick top-up. It also appears that you cannot use Apple’s MagSafe wallet accessory in conjunction with the battery, so you’ll have to pick one. Perhaps the next step is Apple attaching a wallet to the battery.

Introduced last year with the iPhone 12, MagSafe is Apple’s new standard for wireless charging and accessories. The technology uses magnets inside the iPhone 12 to keep accessories like the MagSafe Battery Pack firmly attached to the rear of the phone. And when you place the iPhone 12 on Apple’s MagSafe charger, it ensures the phone aligns properly above the charging coils.

The term ‘MagSafe’ itself is repurposed from the MacBook line, where Apple used to offer charging cables that magnetically snapped into place and safely came undone if someone tripped on the cable, preventing computers from going tumbling.